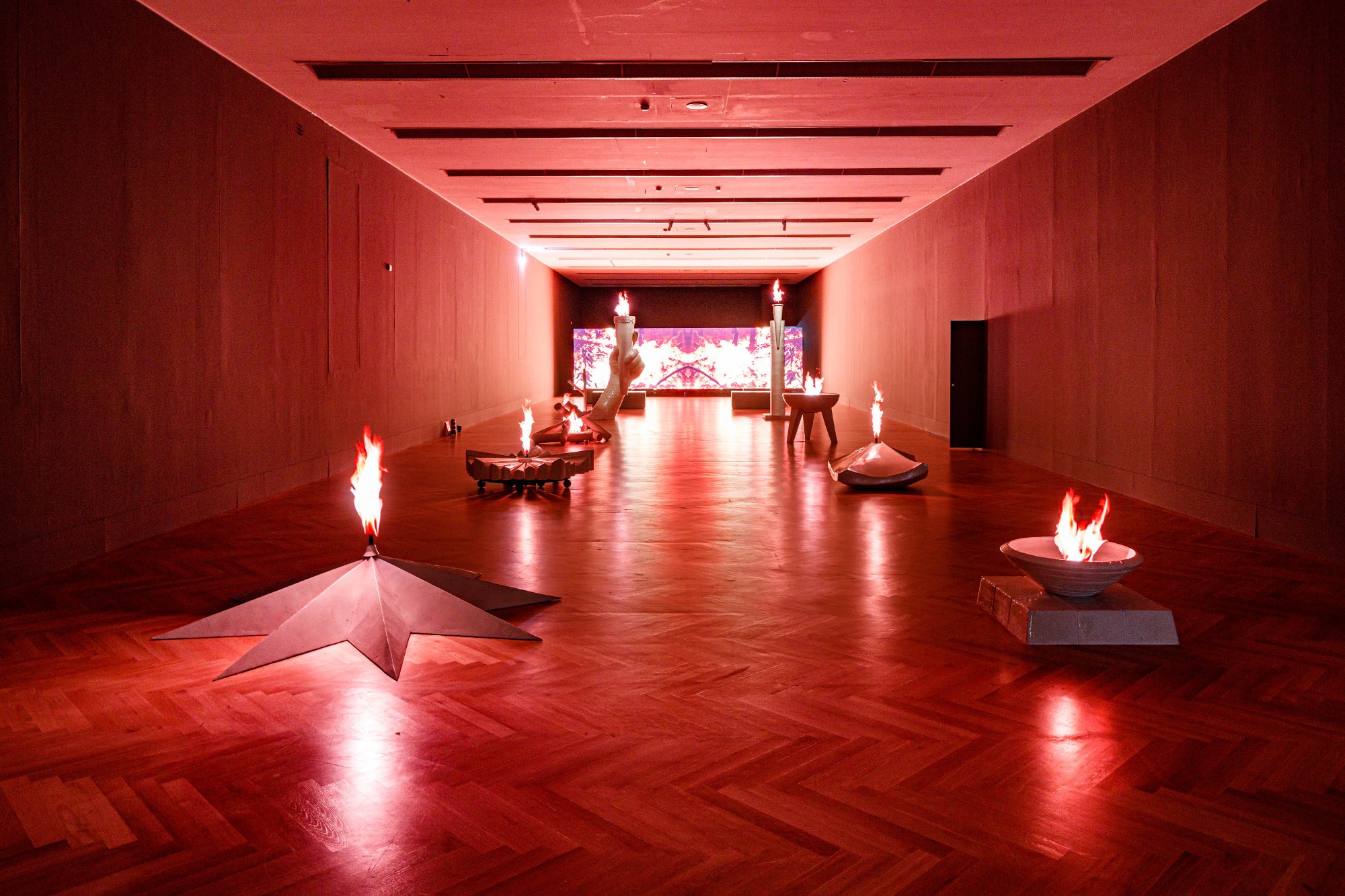 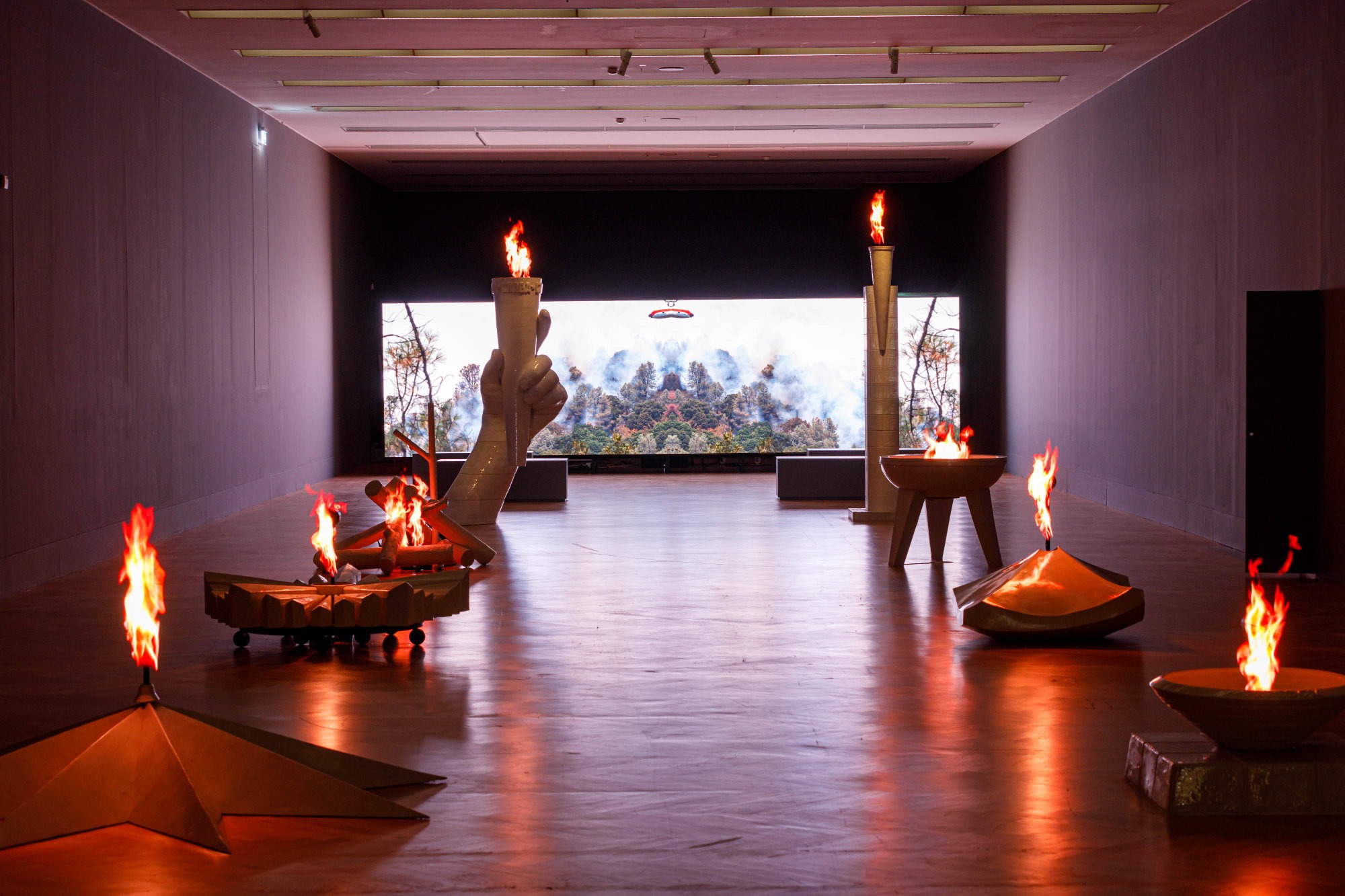 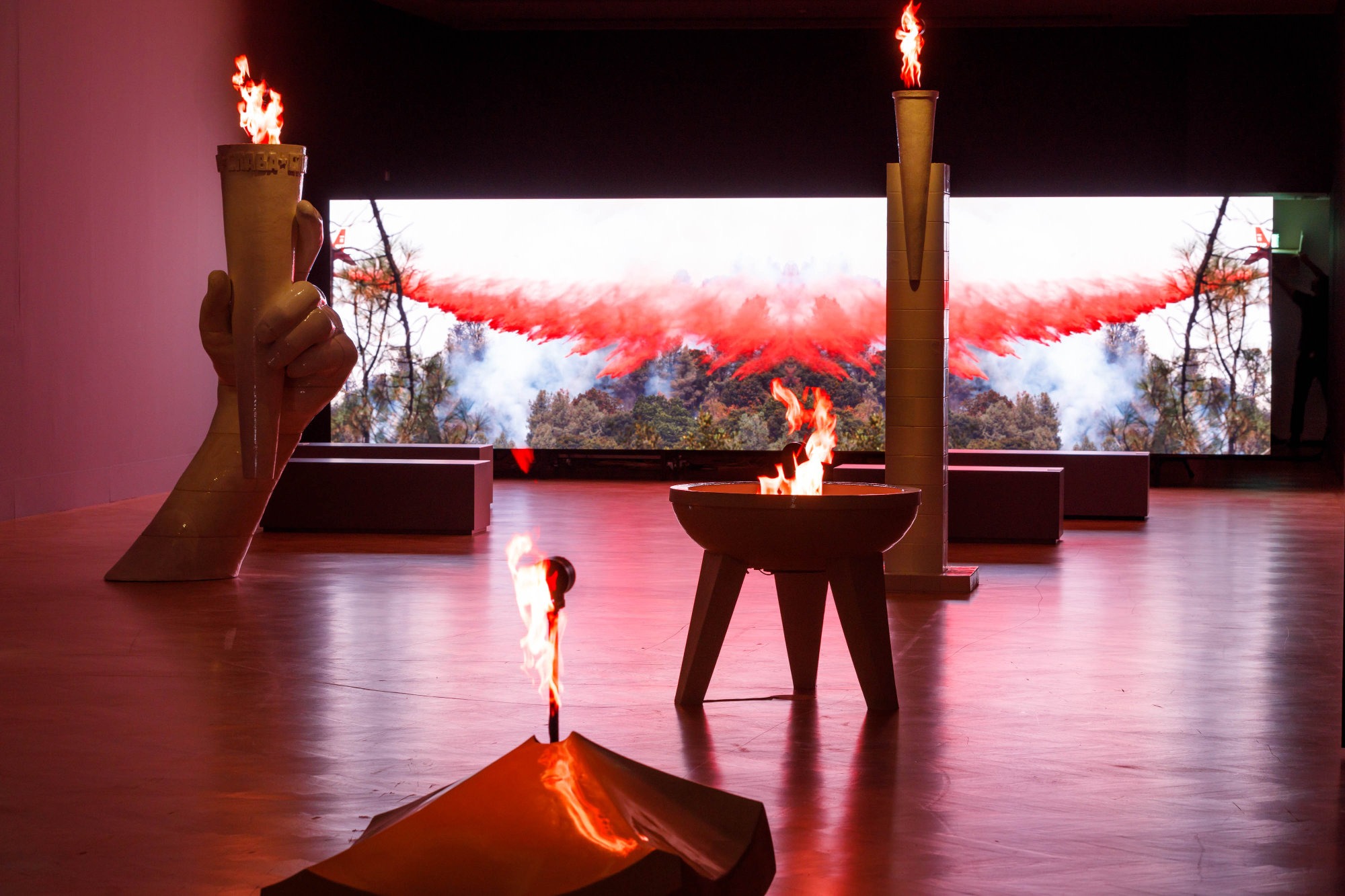 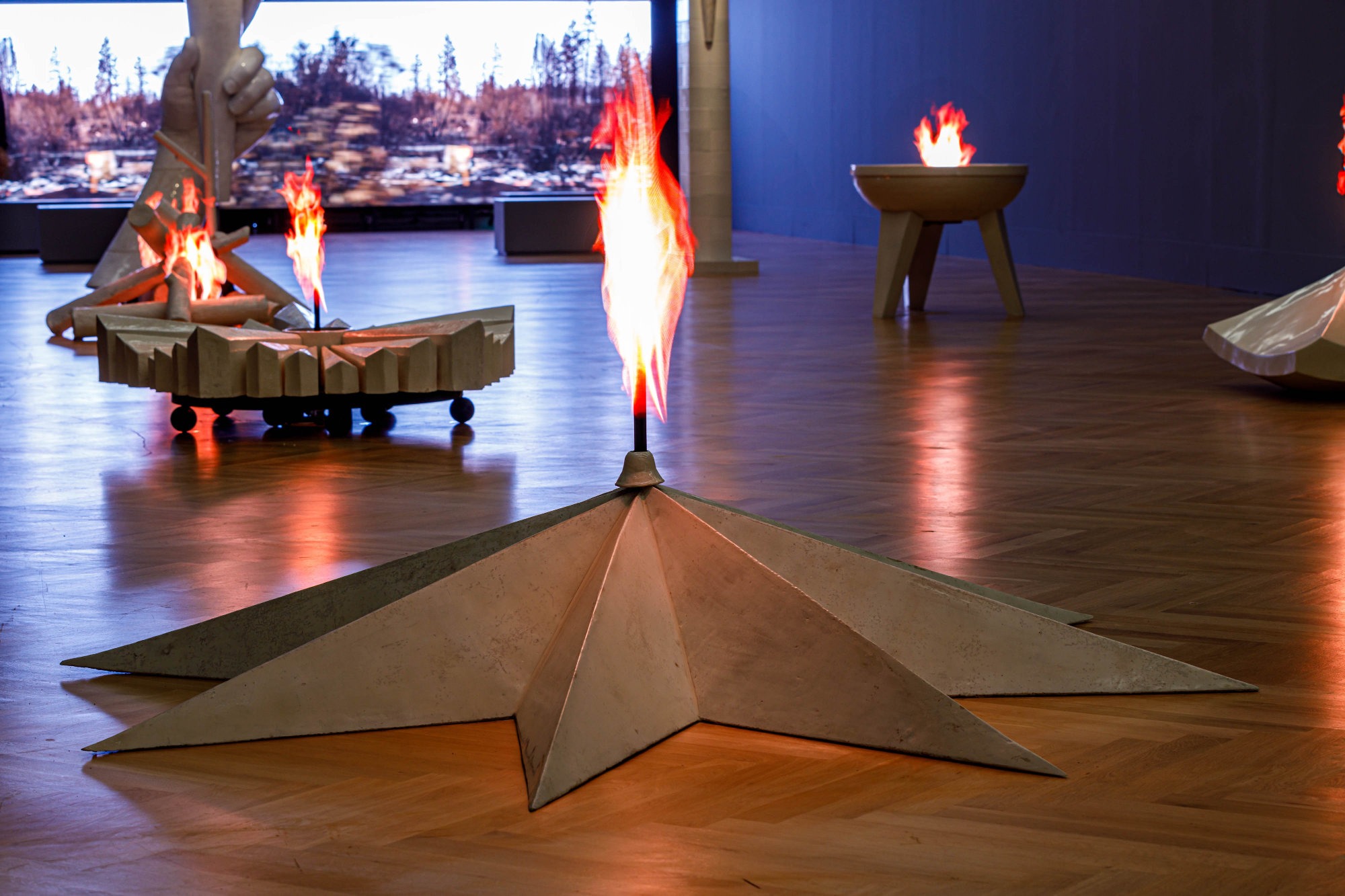 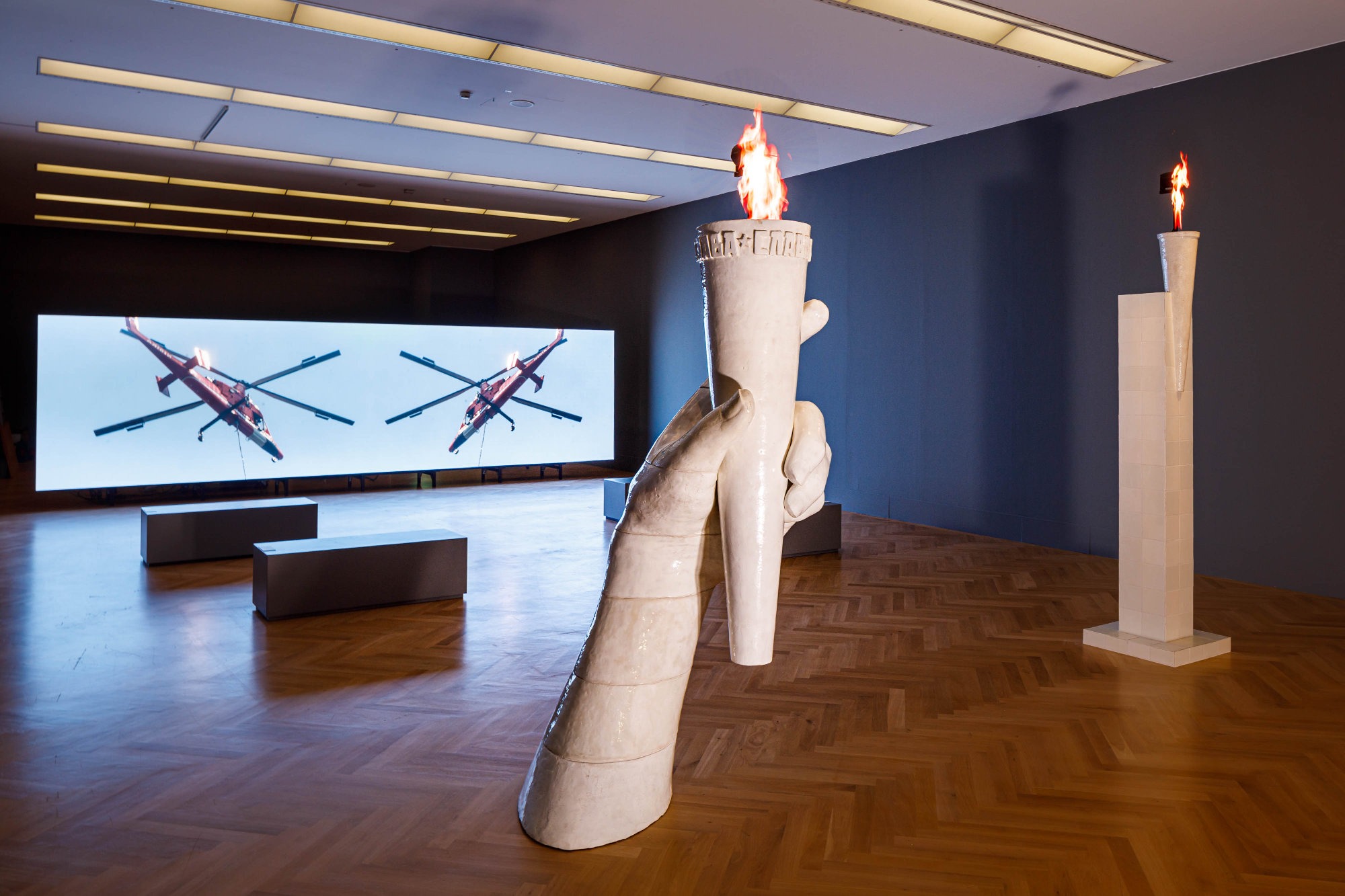 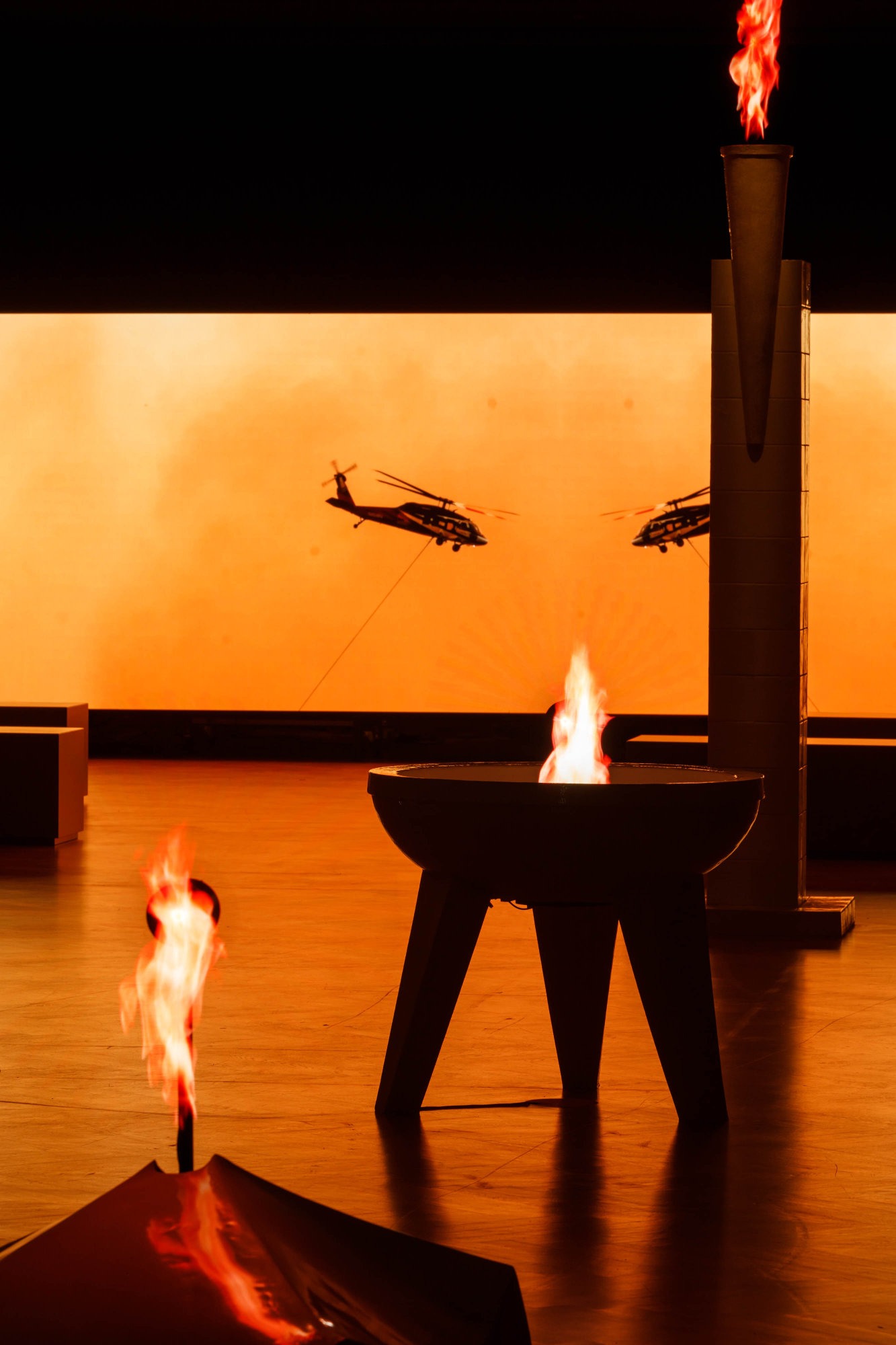 Humankind has always had to fight against the forces of nature, but when these become rampant or turn into catastrophes, real events influence our notion of nature and are reflected in pictorial representations of our visual cultures.
Julius von Bismarck delves into questions regarding a contemporary conception of nature within the context of recent climate changes. In his performances, installations, sculptures, videos and photographs, he oscillates experimentally between scientific and artistic perspectives and, in doing so, creates powerful aesthetic imagery. ‘I draw my inspiration from science and work artistically,’ von Bismarck explains his working strategy. Always on the lookout for alternative forms of perception, he translates nature and technology into fresh, hitherto unseen images.

For an exhibition in 2015, von Bismarck spun around on a large, fast-rotating dish, his Egocentric System, thus confronting himself with centrifugal forces for an entire week. For his work Punishment, the thirty-six-year-old artist gave the ocean in Rio de Janeiro and the mountains in the Swiss Alps a whipping, ironizing the human ambivalence between megalomania and pettiness. In Venezuela, he used rockets to trigger lightning, forming it and manipulating the forces of nature through his intervention. The artist has exposed himself to extreme weather events often understood to be consequences of climate change: the hurricanes Irma in Florida and Ophelia in Ireland. The results are slow-motion video works: The camera stretches seconds to minutes, presenting wind and floods not as apocalyptic scenes but rather as moments of great calm and poesy. “Suddenly, you look into the aesthetics of this storm [...] and see plants being caressed by the storm. The result is something very delicate, something very beautiful – trees dancing with the wind,” von Bismarck explains.

His visual processing of natural events seems to want to convey that, as devastating and powerful as the forces of nature appear to be, there is a boundless beauty hidden in the catastrophe which needs to be depicted. This contrast becomes particularly clear in the exhibition Fire with Fire, which is based on von Bismarck’s expeditions to various forest fire sites.
The central work in the exhibition space is a large LED screen, on which a video is presented depicting decelerated images of forest fires in a vertical symmetry. This mirroring explicitly refers to the aesthetics of the so-called ‘inkblot images’ developed by the Swiss psychoanalyst Herman Rorschach for his test of ‘psychological diagnostics and personality psychology’.

The French philosopher Gaston Bachelard ascribes such a hypnotic effect to fire that he concludes that ‘nowhere else does one dream as one does in front of the flame of a candle’. It captivates us, and we can neither turn our gaze away from the burning of a campfire nor from the roar of a forest fire. If we follow Bachelard and Rorschach, this ‘psychoanalysis with fire’ creates a space for reflection. With the publicity associated with forest fires—the collective staring into the flame—a complex psychograph of our contemporary society reveals itself. While viewing the work, moments of irritation arise, since the illusions created by the vertical mirroring of the image differ greatly from the brutal reality filmed.

A promenade lined by eight sculptures leads to this present-day campfire, created with the help of modern media technology. ‘Eternal flames’ in monuments and memorials – constructed sites of collective memory worldwide – are the models for these sculptures. The originals made of bronze or stone are duplicated here in fired ceramics, the blazing fire transformed into flickering LEDs.

The production of fire is one of the great cultural techniques; its use and mastery has been a central factor for all civilisations. As a force that creates everything and destroys everything, fire dominates both the profane and the intellectual realms of human thought more than any other element – the narratives about purgatory, the funeral pyre, the Easter fire, the Biikebrennen, the liturgical formula ‘ashes to ashes’ and the myth of Prometheus, who robs the gods of fire in order to bring it to the people, are but a few examples of the thematic variations of the dynamics of fire.

All these thoughts lead back to the exhibition title, Fire with Fire, which Julius von Bismarck uses as an image to refer to the ambiguity, reflection and interaction of the element – its purifying and destructive, civilising and barbaric power.
www.bundeskunsthalle.de