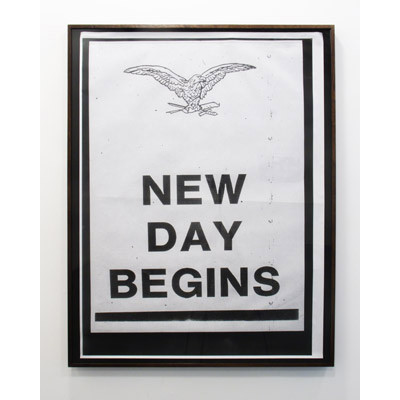 BEFORE EVERYTHING
Curators Aimar Arriola and Manuela Moscoso
18 September, 2010 – 9 January, 2011

Before Everything is an attempt to delve into current artistic production from Spain. The exhibition, in which 56 artists will participate, will occupy the Center in its entirety. Undertaken by the exhibition’s curators Aimar Arriola and Manuela Moscoso, the selection does not set out to offer a totalizing vision of the here and now of Spanish art, but rather to confer an unprecedented level of visibility to productive modalities that have developed in specific locations in Spain; it will attend to the diversity of languages and ways of making art that have characterized the last 20 years. The recent change of decade offers an opportune moment to formulate an exploration of what’s to come and to take a look at the languages and ways of operating that have marked recent art.

The broad conceptual framework for Before Everything revolves around the notion of “expectation.” An expectation entails a reasonable possibility that something happen. Expectation is also a means of regulating our relationship to what is about to ensue, a relationship mediated by multiple external forces. The sphere of expectation also refers to the logic of cultural consumption and our relationship to Art, based on the continuous production of future projections.

This project also aims to explore the connections between the art practices of different generations in order to build bridges and to evidence resonances with the present. In an array of context in the last two decades, a growing group of artists has approached the sphere of art in terms of continuity; they have indicated that the present can no longer be defined on the basis of ideas like “rupture,” “novelty” or “change.” These continuities between generations and their practices, however, are not straight lines by which knowledge is conveyed; nor are they translations or legacies. They are, rather –and to use the term of the philosopher Gilles Deleuze– lightening-shaped trajectories that appeal to a hybrid genesis of contemporary practices.

The exhibition will include a large number of works produced specifically for the occasion. As evidence of the organic nature of the project, and as part of the process prior to the exhibition’s opening, Jeleton (Gelen Alcántara and Jesús Arpal) will carry out “Répétitions anotado” [Annotated Repetitions] during the weekend of June 18 to 20: these workshops for collective reflection and production will help the artists to construct “footnotes” to the works that will later form part of the exhibition. An array of collaborators will be invited to make comments (in the form of drawing, music and speech); the material produced by these sessions will be installed in the galleries themselves in order to multiple readings of the project.
www.ca2m.org