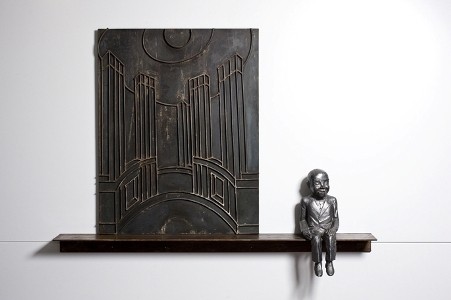 The current selection of works on display from the CA2M Collection is launched at the same time than the public presentation of its detailed catalogue, which can also be consulted in the exhibition rooms.

The first and third floor of the Centre, as well as other common spaces, are allocated to this exhibition. It is an heterogeneous compilation of techniques and topics.
Amongst the pieces of the show, we can identify paintings, sculptures, engravings, photographs and installations as well as a wide range of video works. Some of them date back to the origin of the Collection in the 1980s, others are recent acquisitions, which have been included in the last years. This diversity allows us to address some of the issues repeatedly raised by contemporaneous culture and especially current art.
Presenting the Collection simultaneously with the catalogue enables us to reflect on the action of collecting, the reasons hidden behind a series of works aspiring to be a testimony to its time. A collection is many things at the same time. It is, above all, a way to construct a vision of the world, a manner of creating a plot based on the meanings of all the works and all the lines, more or less visible, which connect them. As a set of works, it is a narration consolidated on references going beyond the objects conserved in their warehouses. It is a constant struggle with the concept of value, so popular in our society. It is also a place where to choose. It is not an archive that can include everything but a selection, one of many, that can’t aspire to represent or explain the totality of art. A great amount of pieces bring up considerations about art itself and how it triggers self-scrutiny and political challenge.

What is the role of art in a world overrun with images? What sense does it have to work with art in this particular moment? What strategies can artists follow to keep on examining the meaning and validity of art? Santiago Sierra documents an action: blocking an avenue of Mexico City with a big articulated truck.
A simple action properly adapted to the artistic vocabulary by means of a great diptych with a black and white image. Sierra does not transgress any social rule through his actions, he takes a system to an extreme to show how it challenges itself. Daniel Canogar’s strategy, consisting in reusing materials discarded by a society in need of a constant change, formulates new questions to an art that does not need to create new images because it only needs to select the ones that already exist.
Following the same line, Dias & Riedweg propose a complex visual exercise: their artwork consists in a photographic documentation of how a suitcase in placed (a direct reference to Marcel Duchamp who condensed all of his work in one valise) on a shelf packed with luggage. Thus, they emphasize the difficulty of separating what is art from what isn’t and they present a poetic reflection on journeys, changes and migrations.
With a piece deployed in all the building, Ignasi Aballí designs a precious metaphor of art and weeds, which persist to grow in any cavity whatever are the circumstances. Relation with the public is one of the habitual issues of this selection.

Dora García’s video work, created for the 2008 Sydney Biennale, features an unfinished performance of the great American comedian Lenny Bruce, brutally censored in that town in 1962. One of the multiple keys of this work is the change of attitude of the audience, laughing while seeing something which had been prohibited only forty years before. David Bestué and Marc Vives’s big installation occupy the totality of the old building on the CA2M first floor. It proposes to the viewer to do the same path as the protagonist of the video in order to reach confirmation: a symbol of the evolution of any person and probably of the artists themselves. Ultimately, they suggest to dance on the rhythm of a pop music song whose lyrics remind us to dance without solid ground, without confirmation.
Some of the works displayed reflect the reality of a changing world, submitted to dramatic breaks through the last decades. Many images represent falls, breaks or dissolutions. Some of them are real objects and their destruction remains printed in our eyes, like the World Trade Center’s collapse in New York as showed by Thomas Ruff using a press image. Fernando Sánchez Castillo explores a similar strategy recreating several monuments of Madrid as they were during the Civil War. The Government of the Republic protected them building other constructions intended to hide them in a metaphor of the situation of the besieged capital. Other works show the end of ideologies witnessed by a whole generation of Europeans: the representation of the dramatic changes of David Maljkovic’s native Croatia which occurred with the fall of the Berlin Wall in 1989 or the observation of unachieved plans like the shattered dream of Latin America’s model showed by Alexander Apóstol in his video.

Similarly, El Perro, a collective from Madrid, takes us to the former prison of Carabanchel –a district of Madrid– which represents a bitter memory for political and social prisoners of Franco’s regime. We can see how a group of young people is skateboarding in it recalling the American soldiers in Saddam Hussein’s pool in an attempt to attest the end of an empire. Mateo Maté reflects on the contradictions of nationalisms in a time of identities’ crisis. At the same time, David Goldblatt draw post-apartheid South Africa closer through the presentation of stern portraits of city councilors, which can be interpreted in multiple ways. Ultimately, we face a vision of the world in constant mutation —a world in which absolute truth does not exist, a world fully aware that History is being written at any time according to the actions and decisions of the whole community and its representatives.


About the Collection
The Collection of the CA2M Centro de Arte Dos de Mayo of the Regional Government of Madrid includes close to 1,500 works. It’s a constantly growing testimony of the evolution of art from the 1980s to the present. The Collection devotes its attention to Madrid and Spain, by acquiring works which follow the evolution of its artists, galleries and exhibitions. It focuses on photographs and paper format works, though every kind of medium is represented.