A Case Study of Radical Performance 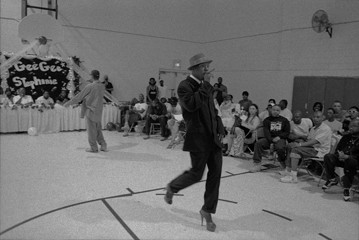 Bodies are agents of history, as much as its product. Bodies are historiographical tools for interpreting the past, present, and future. History is therefore somatic—a choreographic repertoire of gestures read in a particular order. Gestures make us legible to others. They belong to a gender, an ethnicity, and a social class. They refer to identities that are naturalised through the repetition of those same gestures. A pose is a conscious recognition of the construction of gestures. To pose, then, is to be become aware of how a body makes history. To strike a pose is to pose a threat, as culture theorist Dick Hebdige wrote apropos of the meaning of style in youth subcultures. That’s why it is important to trace the history of dissident gestures, the genealogy of those poses that are bold enough to confront the norm, opening up space to imagine alternate futurities for the body or even new social choreographies that are yet to come.

The stylised poses from a voguing performance belong to that kind of gesture. For those who dare to listen, the hands of a vogue dancer tell a story whose implications and possibilities extend beyond the individual body of the performer into a terrain of collective struggles and minority resistance. Voguing is a dance form inspired by the poses in fashion magazines, although it was invented by those who have been again and again incarcerated, racialised, medicalised, and punished. When taken as a case study in radical performance, voguing demonstrates in tangible, even dramatic ways that to strike a pose is to brush history against the grain. This exhibition delves into a political history of the body, in order to explore the radical incarnations of style and identity that intersect in the house ballroom culture that emerged decades ago from Harlem, New York.

True to its roots in gay nightlife and black cultural expression, ballroom is an underground scene where Black and Latina “femme queens” and “butch queens”—among other queers of colour—come together to see and to be seen. In a drag ball, with its high-spirited vogue battles and runway performances, we are in the presence of a whole panoply of outcast identities that parade their most spectacular selves. And yet, ballroom also allows for the emergence of vectors of subjectivation that no longer fit into confined categories or established typologies. These vectors cut across a number of minor histories, liberation struggles, and communities of affect. In other words, the kind of performativity that this exhibition traces does not belong to one single place or social group. Instead, it reverberates across that elusive spacetime that poet Fred Moten calls “the undercommons”.

How can a gesture become minor? This exhibition considers the manifold ways in which minorities use their bodies to produce dissenting forms of beauty, subjectivity, and desire. These minor poetics are perceived as a threat to the normative world, and yet craved by mainstream culture—as exemplified by Madonna’s exploitation of the aesthetics of vogue. Looking into the debates, conflicts, and cultural struggles surrounding voguing as a case study in radical performance, Elements of Vogue tackles the intricate dynamics of assimilation and resistance. This is not an exhibition “about” voguing, but an essay that unfolds in multiple directions by looking at the queer body as an archive, in order to map out the different subjectivities, affective legacies, and embodied histories that come together in ballroom culture. Voguing, then, reveals itself as a case study to understand the emergence of pose, and its ability to articulate new social forms. The exhibition traces the networks of affiliation that shape the lives of those who cohabit in the space of the undercommons, and the strategies that enable them to dismantle the hegemonic categories of race, sex, and gender. Because a pose is sometimes enough to interrupt the process of normalisation, and the least of gestures can put history on hold.

Elements of Vogue can be inscribed within the lines of research at the core of CA2M’s programme, examining the relations between art, music, visual culture and subcultural phenomena.

Alongside the exhibition itself, there will be a live arts programme of voguing performances, workshops, oral history and educational activities. Voguing will also be featured within the Film On Sundays programme as well as the subject of a new collaboration with Teatros del Canal in the performance it is preparing to add to this programme with Marlene Monteiro in January. The programme is designed to build up throughout the first half of 2018 until the dance held to celebrate the closing of the show in May 2018.

Visits Wednesday and Saturday at 6:30 pm

Two publications will be released to coincide with the exhibition: firstly, a reader published jointly with the publishers Oriente y el Mediterráneo’s BAAM (Biblioteca Afro Americana Madrid), featuring a selection of texts on the black political body in the USA throughout the twentieth century made by Mireia Sentís; secondly, a publication in the form of a constellation that includes the works in the exhibition with other cultural citations that enable a reconstruction of the narrative in which they are inserted.
www.ca2m.org