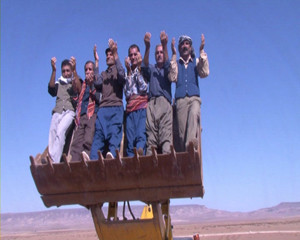 By means of videos, photo works, and sculptures, Halil Altındere analyses the reality of his country, Turkey, by underlying the tensions that generate binomials as tradition/modernity, nation/identity and society/government. Simultaneously, Altındere draws attention to the notions of community and control, delving the nature of power.

This time, CA2M reviews Altındere ́s work under three basic lines. The first one, and most important, follows his positioning regarding the contemporary Turkish society, subject to intense changes in the last decades. For this, Altındere frequently intervene on symbols from the system, as bills and official documents, elements from folk tradition or from some topical images that all together build up the collective imaginary. Ironic work placed on the imprecise space of multiple interpretations, a humorous play between artist and viewer. The discussion on the notion of authority is on great part of his work, sometimes as tiny narratives that string surprise and absurdity.

This exhibition also targets the attitude of the artist towards a globalized art world, with some of his works in response to previous invitations for his great exhibitions. The shift of his working method, critical and challenging, toward other contexts launches mechanism that question art itself as well as dynamics that, within the system, are understood as normal. Altındere ́s no-work for Documenta 12, as well as the one finally presented, as well as the one launched for the Sharjah Biennial, in the United Arab Emirates are clear examples.

Finally, the exhibition tours the important role of Halil Altındere within the Turkish art scene. Through exhibitions where he has been curator himself, as well as editor from the magazine Art-ist, Altındere has achieved to create a bridge for generations by putting in place a serial of fertilized personal and artistic relationships which are now the cultural panorama of the city. Thus, CA2M holds a selection of publication and documents on the development of current art in Istanbul.

Halil Altındere was born in Mardin in 1971. He graduated from the Painting Department at Çukurova University, Adana. In 1996, he moved to Istambul, where he still lives, where he was part of the new art scene that emerged at that time.

Altındere ́s participation in the Istanbul Biennial a year later, curated by Rosa Martinez, was the turning point of the visibility of his work, followed by the Biennial of Gwangju and Manifesta in 2002, as well as the previous ones Documenta in 2007 and the Biennial of Sharjah in 2009.
www.ca2m.org