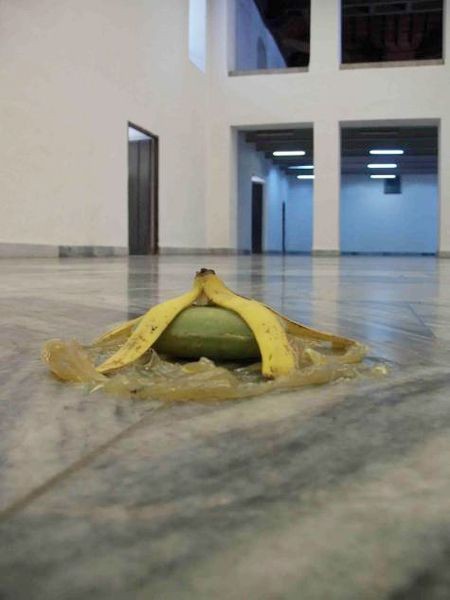 Tied Up to the Table Leg is the title of Wilfredo Prieto's exhibition at the CA2M. This monographic exhibition, the first a Spanish museum ever dedicated to this young Cuban artist, presents a great number of his recent works in addition to some pieces created especially for the exhibition. This is the first time that such a large number of Wilfredo Prieto’s works have been brought together in a single exhibition. The exhibition includes installations, sculptures, objects, interventions, performances and drawings. A formal plurality resulting in a morphological freedom in the artist’s production which uses these media as ancillary tools to express different concepts.His works can thus be highly ambitious in technical and material terms, almost impossible to execute, or made with simple everyday materials. Tied Up to the Table Leg is also one of the works of the exhibition: a performance consisting in a helicopter standing still over the roof of the museum during one hour. A rope has been hung from it and, after going down the floors by the stairs, it has been tied up to the leg of a table located on the ground floor.After the performance of this action, it is still possible to see the table, the rope and a video showing what happened.

This piece introduces some of the elements present in all the works included in the exhibition: conceptual force, narrative brevity, lack of superfluous elements, persistent references to artistic praxis itself, a delicate sense of humour, semantic games that come full circle, and a poetics consisting of persistence and subtlety in equal measure. Ultimately, his work consists of drawing the straightest line from the original idea to its formal materialisation.

The exhibition creates its own narrative through several pieces that, contrasting with their apparent everyday nature, are carefully produced. Some of them are extremely ephemeral, like the puddle of different liquids. Others are a challenge to many of the concepts commonly accepted in contemporary art by questioning some of the things assumed as normal. They all seek to find a minimal gesture with meaning, providing it with both poetry and critical sense. Reading the descriptive plaques reveals how in many cases the title, materials and formalisation are virtually identical like in the cases of the puddles: Café con leche [Coffee with Cream] consists of coffee with cream, Cuba libre is a rum-and-coke... The literality merely draws our attention to the hidden pitfalls of language. It amplifies the limitations of words by depicting exactly what they describe. In a seemingly offhand way, Wilfredo Prieto tackles profound themes which often revolve around the relationship between art and life.

At times he plays with the famous saying which states that the ends justify the means. Some of his works generate a tension between the resources invested and the aims achieved: an enormous effort for a minimal result. Far from aiming to challenge the pragmatism of contemporary society, Prieto uses this method to highlight the process and the intrinsic value of the work involved in making art. The magnolia tree located in the CA2M entry hall is a good example of this, although it also offers an ironic reflection on itself: an even larger space would have been necessary to hold that tree. This piece clearly contrasts with others which are the result of a gesture that is much easier to materialise. Thus, the larger works emphasise the near invisibility of the smaller ones, while the latter make the former seem even larger than they truly are.

It is difficult to explain the precision and meticulous care with which this artist works. His oeuvre is the result of a scrupulous dedication which helps him weigh all of the formal and conceptual aspects and rid his creations of any redundant element. Some of the pieces included in the exhibition required the use of complex technology which aims to achieve an unexpected result; in fact, a few were so ambitious that we were unable to find the technology needed to produce them. Moreover, Wilfredo Prieto evidences a constant and enduring interest in art history, particularly that of the most recent era, which is often revealed in subtle references. Latin American Post-Minimalism, the experiences of Cildo Meireles and the sensibility of Felix González Torres are tenuously present throughout his entire oeuvre.

Perhaps one of Wilfredo Prieto’s cleverest tactics is his apparent invisibility in the relationship between artwork and spectator. This exaggerated discretion makes his hand (in this case, conceptual) difficult to recognise. As the artist himself often says, “ideas are in the real world, just like clouds. You see them and you can take them.” In a way, Prieto reminds us that anyone could have done what he did. Perhaps it is for this reason that what is seen and what the artist has deliberately left unseen takes on such importance. With all this, the artist aims to achieve an intentional neutrality, leaving each of the works open to multiple readings. That wide margin he leaves is a space of incredible richness, and this is what makes art a colossal and indispensable human activity.

His works show an intention of keeping away from social or political interpretations. They are full of references to his native island, to the routine experiences of its inhabitants. However, there is no explicit determination to extract critical conclusions. Perhaps it is that insistence, that deliberate “apolitical” status, which gives his work true political meaning.

In the text included in the exhibition catalogue, the Cuban art critic Gerardo Mosquera, who followed his work since the beginning, thus points out: “In conclusion and following the artist’s own impulse for synthesis, if I were to summarize Prieto’s work in a single formula, it would be net idea + simple work=maximum meaning. But, as in the work of Gabriel Orozco, there is always a visual sensibility in action. Sharp, mordant, and at the same time warm and understanding, Wilfredo Prieto specializes in summarizing the most complex issues with an illuminating stroke”.


About the artist
Wilfredo Prieto was born in Sancti Spiritus in the centre of Cuba in 1978. He graduated at the Instituto Sperior de Arte of Havana in 2002. As an early-career artist, his work achieved notoriety since his first participation in the Havana Biennial in 2001 with the piece Apolitical, which is the reproduction of a set of about thirty black and white flags from different countries. Since then, he exhibited in many museum (Smak, Ghent; Kadist Art Foundation, Paris; Castello di Rivoli, Turin) and biennales (Singapore, 2005; Venice, 2007; Jafre, 2009; São Paulo, 2010). He lives in Havana and Barcelona. Tied Up to the Table Leg is the first time that the artist is working in an exhibition with such a number of his works, proposing a new dialogue with the viewers.
www.ca2m.org