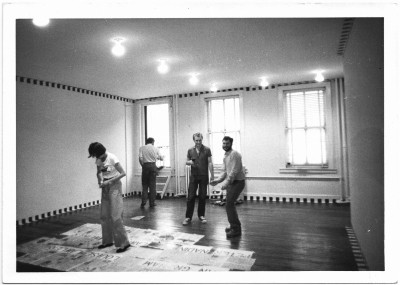 When I state that I am an anarchist, I must also state that I am not an anarchist, to be in keeping with the [....] idea ofanarchism. Long live anarchism.
Between 1975 and 1979, the North American artist Christopher D'Arcangelo (1955-1979) developed an artistic practice notable for its radicality and critical import concerning the role of the artist, the status of the art object and the institutionalization of art. A desire for a radical democratization of the production and reception of art motivated D'Arcangelo's institutional critique. He voiced this in a statement on anarchism which accompanied, in various stenciled and typewritten forms, the majority of his actions and interventions. The statement, which contains an ellipsis between brackets in the place of an adjectival definition of anarchism, recalls the historical expression “anarchism without adjectives”.
Coined in the late nineteenth century, this phrase was first used in Spain as a call for an unhyphenated form of anarchism, in an attempt to overcome the differences between mutualist, communist and individualist political and economic doctrines. Like the use of the ellipsis as a rhetorical device in the work of Lawrence Weiner, D’Arcangelo’s own use of the ellipsis designates a desire to refrain from any ideological closure in the construction of his work, while at the same time it calls for the viewer’s participatory response.
Although interest in D'Arcangelo has not been entirely absent over the last thirty years, to date, no posthumous exhibition or critical evaluation of his work has been undertaken. The written and visual documents which D'Arcangelo compiled over a five year period, in order to chronicle his practice, have only recently been made available at the Fales Library & Special Collections, New York University, following a donation to the library's "Downtown Collection", in 2009, by Cathy Weiner and the D'Arcangelo Family Partnership.
Testifying to an artist engaged in a critique of the social conditions and repercussions of art, and whose work is accessible in archival form alone, represents a challenge to both contemporary art history and curatorial practice. It is this challenge, along with the paradoxes and critical complexities which D'Arcangelo's work and legacy raises, that the exhibition will consider and analyse. Given the paucity of existing commentary on D'Arcangelo's work, and the lapse of time since it was produced, the exhibition will present a series of specially commissioned video interviews.
Intended to form an oral history of the artist's work and practice, the series includes interviews with Stephen Antonakos, Benjamin H. D. Buchloh, Daniel Buren, Ben Kinmont, Peter Nadin, Naomi Spector and Lawrence Weiner, amongst others. In addition, artists Mario GarciaTorres, Ben Kinmont and Christopher Williams will show existing works, produced over the last twenty years, that make explicit reference to D'Arcangelo and his practice.
Stephen Antonakos, Benjamin Buchloh, Daniel Buren, Ben Kinmont, Peter Nadin, Naomi Spector, Mario Garcia-Torres, Lawrence Weiner, Christopher Williams.

With the aim of being both retrospective and prospective, and in the form of an ongoing research, the exhibition will be presented in three different venues. In association with the curators of each venue, various artists will be invited to contribute existing or newly created works as a means of generating a public dialogue on the contemporary significance of the questions D'Arcangelo raised in his art.
Opening at the CAC Brétigny (France) in June, the exhibition will travel to Artists Space New York (USA) in September and the Centro Cultural Montehermoso Kulturunea, Vitoria-Gasteiz (Spain) in the Autumn.
First stage at CAC Brétigny

In collaboration with Pierre Bal-Blanc
While working as an assistant for the John Weber Gallery, D’Arcangelo met the artist Daniel Buren, helping him mount the exhibition, Within and Beyond the Frame in 1973. Following the exhibition, D’Arcangelo continued to assist Buren with his in situ installations in North American and Europe. Acknowledging the importance of this encounter in D’Arcangelo’s work and development as an artist, Anarchism Without Adjectives will open at the CAC Brétigny with a work in situ by Daniel Buren entitled “CONTINUATION” June 2011. The work makes reference to Following and to Be Followed, which Buren conceived in 1978 in response to an invitation by Peter Nadin and D’Arcangelo to participate in an evolving group exhibition in which each artist responded to the existing conditions and/or works already present in the space. The first stage of “Anarchism Without Adjectives” will also include a number of interventions during the exhibition, with contributions from : Nina Canal, Rhys Chatham, Jens Haaning, Florence Lazar, Pierre Leguillon, Mattin, Jean-Luc Moulène, Emilie Parendeau, Alejandra Riera.
www.cacbretigny.com