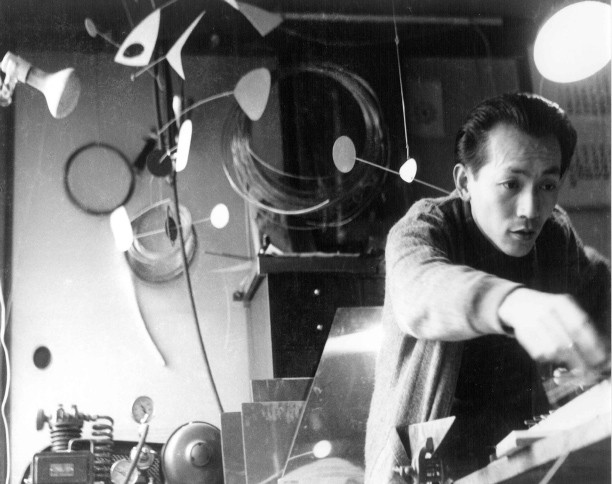 Ei Arakawa, Gela Patashuri and Sergei Tcherepnin represent a new generation of artists that reinvent the notions of collective and interdisciplinarity in the art field. They work as a team in search of engagements with objects through sound and sonic experiments, taking inspiration from the spirit of the Jikken Kôbô movement (1951-1958) while also contributing to the rediscovery of its importance and influence on contemporary practices.
Member of the New York collective “Grand Openings” since 2005, Ei Arakawa (born in 1977, Fukushima, Japan), initiated and participated in several collective experiences, including: "Tbilisi 5. Wednesday was Thursday” in 2008 with Sergei Tcherepnin (born in 1981, Boston, MA), Gela Patashuri (born in 1973, Tbilisi, Georgia) and the curator Daniel Baumann; "Forever Morning Grand Openings at Tbilisi Center for Contemporary Arts, London” for the Taka Ishii Gallery of Tokyo and Reena Spaulings of New York on the occasion of the Frieze Art Fair, London, 2008. The open form of this event created in Tbilisi, outside the art world circuit, is reinvested and renewed regularly by the three artists in the experimental scene (New Jerseyy, Basel, 2009, Kunstlerhaus Stuttgart, 2009, Casco Utrecht, 2010).
“Be a speaker. So be it...” marks a new stage inspired by this Georgian experience and will be developed and presented in three locations (versions X, Y, Z): The Showroom, London ; Bétonsalon, Paris and CAC Brétigny. The plans for a new type of art institution developed for Tbilisi and conveyed by Gela Patashuri’s drawings are associated to Sergei Tcherepnin’s sound experiences produced by transducers. The dynamics of the team is completed by Ei Arakawa, with the goal to reconsider the notion of "ensemble”, common to the vocabulary of arts and sciences.
At CAC Brétigny, “Be a speaker. So be it...” takes the shape of an exhibition whose score is executed by The Ensemble Performance, composed by the artists and members of the art centre's team. Bétonsalon will host "Be a speaker. So be it...” during the exhibition Jikken kôbô, in an “aberrant performative version” according to the artists, and as a preview of the full-scale speaker structures installed at Brétigny.
The exhibition “Be a speaker. So be it...” at CAC Brétigny, associated to the one devoted to the Experimental Workshop Jikken kôbô at Bétonsalon, offers a novel articulation allowing to grasp the sources of these artists’ work. Moreover, what makes this situation exceptional for Ei Arakawa, Sergei Tcherepnin and Gela Patashuri is the ability to highlight their historical and personal links with Japan, simultaneously with the tangible connection they wish to establish with the “Tbilisi” Georgian project and the potentialities offered by the emergence of a country with progressively renascent cultural structures.
Brétigny is part of the same conurbation as the city of Leuville that hosted almost a century ago (1922) the first government of the independent Republic of Georgia, forced to exile; a large Georgian community is still present there. The vicinity of the art centre will be an occasion for the artists to reactivate the link to the audacity of a “Georgian modernism” relegated for too long, similarly to Jikken kôbô, to the footnotes of history.