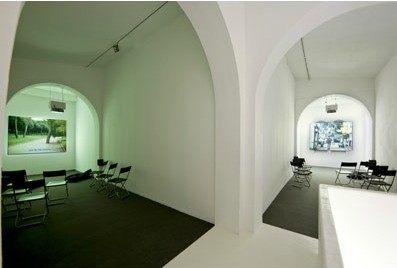 The Delme Contemporary Art Centre presents the latest project by Eric Baudelaire: an installation that recounts the political and personal journeys of the Japanese Red Army, reexamined as an anabasis(1), at once a lost path towards the unknown and a return towards home. From Tokyo to Beirut amid the post-1968 ideological fever, and from Beirut to Tokyo after the end of the Cold War, the thirty-year itinerary of a radical fringe of the revolutionary left is recounted by two of its protagonists. May Shigenobu's daughter of Fusako Shigenobu, who founded the small group witnessed it closely. Born in secrecy in Lebanon, a clandestine life was all she knew until age 27. But a new era began in her life with her mother's arrest in 2000 and her adaptation to a suddenly very public existence. The second character is Masao Adachi, the legendary Japanese avant-garde director who joined the Japanese Red Army and the Palestinian cause in 1974. For this theorist of fg'keiron (a movement of filmmakers who sought to reveal the structures of power by filming landscapes) his 27 years of voluntary exile were without images, since those he filmed in Lebanon were destroyed during the war.It is therefore words, testimony and (false) memory that structure The Anabasis of May and Fusako Shigenobu, Masao Adachi and 27 Years without Images. Two intersecting accounts, mixing personal stories, political history, revolutionary propaganda and film theory. Two stories of imageless clandestinity in which images are nonetheless constantly at stake. They are completely absent from May Shigenobu's secret life, but they become the means of self-invention when she becomes a public figure. As a filmmaker, Adachi devoted his life to images. Even during his years in Lebanon he conceives of the preparation for an airplane highjacking as a screenplay, entrusting the role of making images from his script to the media rather than to a cinematographer. Did Adachi abandon activist cinema for an activism without cinema, or should the revolution itself be thought of as a film? No other filmmaker had gone so far in blurring the border between fiction and reality.Here, the Anabasis is not solely a geographical allegory, it is also political and esthetic. The wandering of May and Fusako Shigenobu and Masao Adachi occurs between the Far and the Middle East, between images of reality and those of fiction, between a radical political engagement and an unsettling fascination with violence. Their paths are symbolic of the political development of a whole era: a radicalization that turns activism into armed struggle, then the gradual collapse of the ideological context of the 1960s, now coming to an end in a spectacularly depoliticized contemporary Japan. So many return journeys that the exhibition views through the lens of an anabasis as considered by philosopher Alain Badiou in his book The Century: "the free invention of a wandering that will have been a return, a return that did not exist as a return-route prior to the wandering." A movement that leaves "undecided the parts respectively allotted to disciplined invention and uncertain drifting, (...) a disjunctive synthesis of will and wandering."€Nothing didactic or objective is attempted in Eric Baudelaire's project; the point is rather to give space to stories, accepting the idea that a history of extreme leftwing terrorism can be nothing but the confrontation of antagonistic, ideological narratives, in a haze of fantasy, emotion, pain and indifference. A text in the making in which language and images are infused with fragmented, conflicting meaning. The character of May Shigenobu enables questions to be raised about the construction of the self through ideologies, myths, narratives, secrecy and the need to find a place in a world rendered more complex by the collapse of radical political certainties. The figure of Masao Adachi pushes the limits of complex relationships between art and action, cinema and revolution, terrorism and activism.Adopting an experimental documentary installation format, the exhibition comprises a set of almost-monochromatic silkscreen prints, a booklet, and a two-channel film where the accounts of May Shigenobu and Masao Adachi are set to new fg'keiron images, filmed in Super 8 in the contemporary landscapes of Tokyo and Beirut.(1) In his chronicle of the retreat of the Ten Thousand, Xenophon names Anabasis a homeward movement of people who are out of place and outside the law. The term symbolizes the collapse of the order that gave meaning to the presence of Greek mercenaries who had come to wage war against the Persians after the sudden death of Cyrus, their commander. The Greek army has to beat a retreat without any guide, without knowing the way; they go from being heroes to being foreigners in a hostile country.

Eric Baudelaire was born in 1973 in Salt Lake City, USA. He lives and works in Paris. Through film, photography, printmaking and installation, he explores the relationship between images and events, documents and narratives. He is represented by Elizabeth Dee Gallery in New York, Juana de Aizpuru in Madrid, and Greta Meert in Brussels. His films were selected at the International Film Festival Rotterdam, and his work is present in several public collections, including the Whitney Museum of American Art, the Centre Pompidou, the Fond National d'Art Contemporain, and the FRAC Auvergne. He is featured this summer in Void if Removed: Concrete Erudition 4 at the Frac-Ile de France / Le Plateau in Paris.
www.cac-synagoguedelme.org