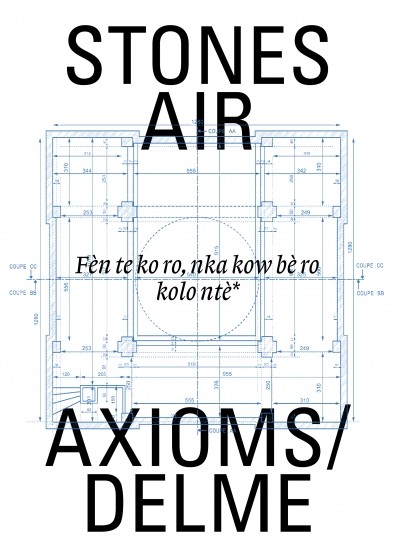 Stones, Air, Axioms / Delme
Fèn te ko ro, nka kow bè ro kolo ntè
(There is nothing in things, but not all things are without content.)

In 2006, at a time when they were both active in the field of experimental and improvised music, Jean-Luc Guionnet and Thomas Tilly came to know each other through their shared interest in relationships between sound and architecture. In 2010 they created the first stage of the project Stones, Air, Axioms at the Poitiers Cathedral using its organ (a Clicquot organ of exceptional quality) to make it resonate through the whole building.

From the outset, they conceived of this sound installation as the first phase of a long-term research project more specifically linked to religious architecture. Following a second instalment at the Corpus Christi Basilica in Krakow, Delme is the third phase of their project.

By virtue of its history and exceptional acoustics, Delme’s former synagogue is the ideal setting for a customised, on-site sound installation. Jean-Luc Guionnet and Thomas Tilly are deliberately leaving the place empty, giving visitors an experience of both visual and sound architecture. By supplementing the built space with frequencies, as well as voices, instrumental notes, rhythms and silences, the artists offer everyone a special listening situation: whether this listening is drifting or attentive, static or mobile, it is guaranteed to give visitors a different perception of the place, which is remoulded by the volume of air it contains and by the sound travelling through it.

The “score” of Stones, Air, Axioms / Delme was composed partly from architectural drawings, whose principal measurements were translated into sounds and waves, and partly from recordings of voices and instruments, which spread through the space.

The voices in question mix different languages both familiar and foreign, comprehensible and incomprehensible. They are not just abstract sound materials, but also vehicles of a meaning that fades away in the succession of its echoes. From Dogon prayer translated from one language to another, to the personal account of a mystical experience, these voices combine to form an architecture of sounds and signs favourable to the decompartmentalisation of all the senses.

Extract from a text by Jean-Luc Guionnet on Stones, Air, Axioms / Delme :
(...)
10.5 – there is the placing of all of these sounds, meanings, signs in space
11.5 – there is the shaping of the uncontrollable relationships between them
12.5 – there is the exhibition of the elements as they are
13.5 – there is the building of colossal objects aggregating several fragments from our different sources
14.6 – there is our counting of time: the voices, instrumental sounds, synthetic sinuses take their place in the space, so time structures itself around these words, these prayers, these phenomena, as a river goes around rocks that it polishes day after day.
(...)