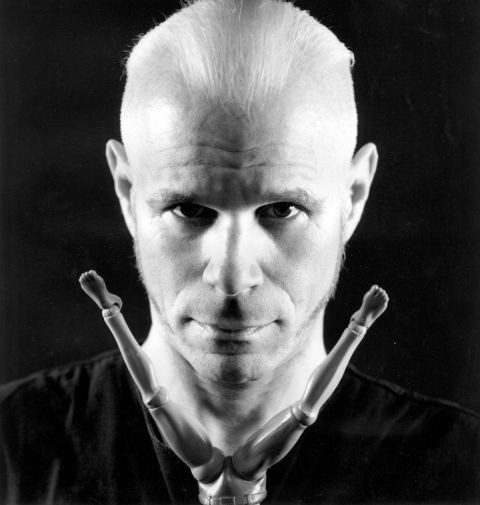 As part of Electron – Geneva's festival of electronic cultures – the Centre d'Art Contemporain Genève pays tribute to two major figures of the New York's' musical, performative and cinematic scene. GENESIS BREYER P-ORRIDGE and CHARLES ATLAS have known how to get through epochs and styles without ever being influenced by the mainstream tastes but by continually reinventing themselves while staying true to their freedom of expression and to a total autonomy of choice. Two exceptional guests, who both, with different artistic practices, have known how to cross three decades of music: from the 80's experimental artistic scene up to now.

In collaboration with Francesco Bernardelli

Genesis Breyer P-Orridge is an artist, performer, musician and precursor of industrial music – a hybrid genre between electronic music and sound-experimenting rock – centered on deviant themes, such as prostitution, pornography, occultism or serial killers. From the beginning, Genesis Breyer P-Orridge declares that through his art he wants to come into touch with as many people as possible and estimates that performance is not the best way to do it. He therefore decides to focus more on music, while maintaining a strong performing aspect in his concerts. He has been the object of many controversies following his early conflictory performances, especially with Coum Transmissions at the end of the 60's, then with the band Throbbing Gristle at the end of the 70's. His more recent musical activities with Psychic TV gave him a larger recognition, and even some successful singles. He has participated in more than 200 musical productions.

THEE MAJESTY
GENESIS BREYER P-ORRIDGE – DIVINATION OF WORD
BRYIN DALL – FREQUENCY OF TRUTH
Created in 1997, Thee Majesty is the brainchild of legend, Genesis Breyer P-Orridge (Throbbing Gristle and Psychic TV) and Bryin Dall (Hirsute Pursuit and 4th Sign of the Apocalypse). Genesis provides the expanded poetry while Bryin tortures his guitar in a serenade to the words. Each and every live show is a unique event unto itself! No two are ever the same. They are all an ad libitum performance existing only within the time and space in which they are performed. Prepare yourself for a night of astral travelling as Thee Majesty transports you to other realms that can only be conjured by these musicians of Word and Sound! An experience that you will never forget and one which will never be repeated! Where other artists fear to tread, Thee Majesty soars!

CHARLES ATLAS
(*1949, born in Missouri, lives and works in New York and Paris)

Charles Atlas has been a pioneer figure of film and video for more than forty years, he has extended the limits of these mediums, forging a new universe composed of a great variety of genres, stylistic approaches and techniques that had a considerable impact in New York's artistic universe. He is also a pioneer in the development of dance-media, a genre where the performance is directly created for the camera. In his work, the filmmaker and videographer has always privileged artistic collaborations, working with important artists and performers, such as Leigh Bowery, Michael Clark, Douglas Dunn, Marina Abramovic, Yvonne Rainer, Mika Tajima and The New Humans, Antony & The Johnsons and, above all, Merce Cunningham, with who he has collaborated closely for ten years. Atlas has also created video installations such as "The Hanged One", a work inspired by the symbolism of tarot and fetish culture, which includes video but also "rotoscopes", mechanical mannequins and theatrical lightings.

PROGRAM OF FILMS BY CHARLES ATLAS
PUT BLOOD IN THE MUSIC, 75 MIN, 1989
More a cultural document than a documentary, the film is a lively testimony of the urban music scene of New York in the 80's. In a musical collage coupling performances and comments, Atlas captures the energy and pluralism of the urban environment, by focusing on influential urban figures such as John Zorn and including performances of Sonic Youth and Hugo Largo.

WHAT I DID LAST SUMMER, 12 MIN, 1991
The three short works of this compilation celebrate the gay nightlife of New York in the early 90's. "Butcher’s Vogue” stars a waitress, a vogue dancer waiter, two prostitutes on the run and a cop. In “The Draglinquents”, the performances of two drag queens are superimposed on commonplace pictures and bodybuilder movies from the 50's. "Disco 2000" mixes homemade optical effects with sequences depicting a crowd on a dance floor and a dancing chicken.