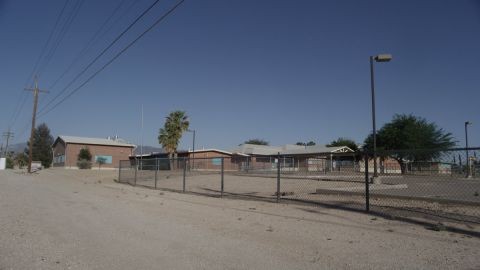 The Centre d’Art Contemporain Genève presents Nicole Miller – The death of a school, the video artist’s first show in Switzerland. Curated by Andrea Bellini, the exhibition will display two of Miller’s video installations: Untitled (2012) and Death of a School (2014).

Untitled (David and Darby) consists of a single-channel video and a two-channel video projection. The installation brings together the two separate personal stories of Darby – through his son CJ – and David. CJ, the son of the now dead film actor Darby Jones (1910-1986), attempts to rebuild a relationship with his father through old Hollywood film footage. In the adjacent single channel video, David — a man the artist met on the street – recounts the loss of his left arm while creating the illusion of a recovered limb through a mirror reflection; a technique used to help patients get rid of a painful phantom limb.

Miller’s videos grant these individuals a space in which they “reconstitute their dramatic losses, as opposed to representing themselves. They are specific attempts at retribution using representation as a tool”; in CJ’s case for example through appropriated and edited footage of his father’s stereotypical roles –the butler, the crazed zombie, the African chief -, usually assigned to African American actors in the early days of the Hollywood film industry.

Central to Untitled and Miller’s approach are notions of subjectivity and self-representation, especially in relation to the African American male body. Through acts of re-editing or mapping Miller locates in her subjects “a potential solace, perhaps to reach an understanding, hence, agency.”
The artist considers that it is “the passage of time that allows for a new edit or understanding of the potential of an image”; thus the importance of appropriation and storytelling in her work. It is perhaps the thirty years that now separate David from the traumatic loss of his arm that allow him to recount the event and “immerse himself in the attempt to reconstitute his arm.”

The artist’s approach is consciously collaborative. The viewer is essential to Miller’s practice as a central actor in the transformation of an image’s meaning. The process of transmission and subjective interpretation implies a constant evolution of the image’s nature. Furthermore — according to the artist — “active viewing can be used as a tool to reconstitute personal histories, or even one’s body.”

In the second video installation — Death of a school – Miller attempts to address the phantom feeling left by a school’s shutdown in Tucson Arizona. The subject is personal: her mother spent her entire career as a teacher at the school; a school sullied by the city’s political bullying and anti-immigration ideology. The installation will consist of three screens shuffling through slow pans of the school being physically shut down along with static shots of a school closed down and abandoned for good.

While David’s attempt to reconstruct his arm reveals the power of visualization, the school’s shut down disclose/represent “the death of thought in the pictured space”.