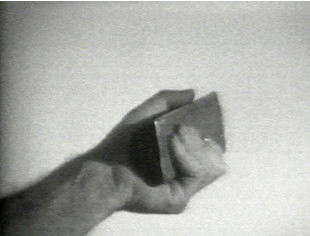 “The waiting room is in every way an in-between. Wherever it may be, this space with basic furnishing, poorly lit and uncomfortable, leaves no room for doubt: it is not a goal per se. It only serves as a transitional space-time continuum to other territories. No reason to spend more time there than necessary. And yet, we will stay longer than expected. We will have to find an occupation to spend that time.
But why wait? What is there to see beyond?” Simon Lamunière Curated by Simon Lamunière, the exhibition partly comprises video works collected by André Iten at the Centre pour l’image contemporaine (CIC - Centre for Contemporary Images) between 1986 and 2008. Simon Lamunière was involved in the carrying out the CIC’s programme on an assignment basis from 1987 onwards, then as a curator from 1996 to 2003. In particular, he curated the “Version” biennials between 1994 and 2002. This exhibition is an extended dialogue about the works assembled by André Iten.

EXHIBITION CONFIGURATION
The exhibition comes in two stages. Firstly, the core of the exhibition (around the entrance stairwell) appears like a large waiting room divided into 8 sectors. After taking a ticket at a queue ticket dispenser, visitors first sit in one of the sectors to watch a selection of videos from the “Fonds Andre Iten”. Here, the waiting room represents an in-between, transitional place that suggests a temporary, constrained occupation. This stop-off in time and space offers visitors to watch these works while waiting their turn to enter the second part of the exhibition.
All around, a white wall offers a glimpse, through a succession of entrances, into the ambulatory part of the exhibition, consisting of eight specially fitted-out rooms that feature video projections or installations by internationally renowned artists. All deal with the theme of void.
The starting piece of the ambulatory part is Samuel Beckett’s “Geistertrio”, which sets the tone and plunges visitors into a waiting atmosphere, a sense of the very slow passing of time.
The installations offer the visitors to physically feel that “void feeling”, in particular with works by Martin Creed or Stephan Brüggeman, through rooms that empty and fill up as visitors get in and out.

With the support of Ville de Genève.
www.centre.ch