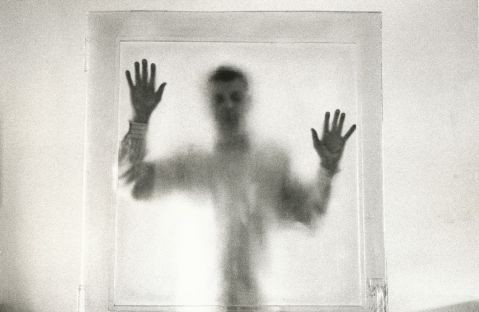 The Centre d’Art Contemporain in Genève presents Robert Overby – Works 1969-1987, the first institutional survey exhibition of the artist’s work in Europe. The exhibition – curated by Alessandro Rabottini – is organized together with the GAMeC – Galleria d’Arte Moderna e Contemporanea in Bergamo, Italy (where it will travel in May 2014), the Bergen Kunsthall in Norway (where it will be installed in September 2014) and with the Consortium (Dijon).

Despite his extremely prolific and diversified practice, Robert Overby remains one of the best-kept secrets of Post-War American Art, as he rarely exhibited in his lifetime. His multi-faceted artistic output – encompassing sculptures, installations, paintings, prints and collages – is a mysterious and inspiring exploration of representation, space and identity; an investigation of the human condition and its decay, beauty and absurdity.

Robert Overby (1935-1993) was born in Harvey, Illinois. For most of his life, he worked in Los Angeles as a graphic designer (remembered for the Toyota logotype still in use today) and subsequently as a practicing visual artist. Beginning in 1969, Overby developed an impressive body of work characterized by a restless experimentation with materials and processes. His most iconic early works take the form of architectural casts of doors, windows and facades made of rubber, latex and concrete; pieces that occupy a space in between sculpture, painting and installation, and that reveal a conceptual concern for a material understanding of the passage of time. The four years between 1969 and 1973 mark an incredibly productive period in which the artist created over three hundred works, which he documented in his “336 to 1. August 1973 – July 1969”, a self-published book with reversed chronology, which has been recently reprinted by JRP / Ringier.

The works produced during that seminal phase show the artist’s very personal meditation upon a number of recent and concurrent artistic practices, especially Claes Oldenburg’s soft sculptures and post-minimalistic investigation of perceptual surfaces. However, Overby’s work quickly diverged from those experiences and developed into a more psychological and narrative approach that saw the domestic space, and architecture, as metaphorical extensions of the bodily decay. This led the artist to refer to his practice as “Baroque Minimalism”.
It is perhaps his preoccupation with the physical nature of memory that makes his work so timely and relevant, if seen in retrospect together with the works of artists who emerged in the Nineties or later like Rachel Whiteread, Kai Althoff and Seth Price, to name a few.

Starting in 1973, painting became a central medium for Overby. His figurative works explore the representation of the human body as a site where identity is transformed, theatrically expressed, and concealed. Different in scale and style, his painterly production contemplates both intimate and delicate paintings where figuration fades into abstraction, as well as more exuberant and confrontational works that deploy references to pop culture, sexuality and consumerism.

Through both an extensive selection of works, and the exhibition layout, Robert Overby – Works 1969-1987 tries to make justice of an art practice that was visually so varied but extremely coherent and consistent from the conceptual and existential point of view. In this sense many works on view can be understood as explorations of concepts like “surface” and “skin” translated as sites of transformation, being the skin of a building, the skin of a painting as a material entity or the artificial skin of a latex mask that allows one to perform multiple sexual identities. Robert Overby’s œuvre can thus be interpreted as a critique of “style” as a univocal and stable intention, in favor of an idea of art as an ongoing investigation of the human condition captured in a constant state of flux.
www.centre.ch