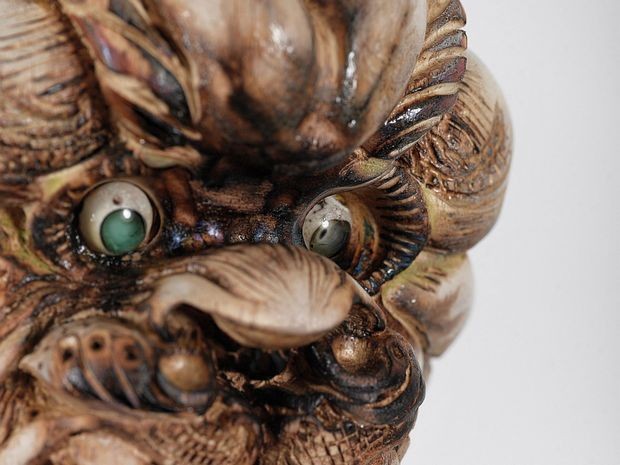 PERLA POLLINA will comprise approximately 70 works, spanning 1996 to 2016 and covering the different aspects of his rich and intricate production. Through an array of unconventional techniques, Cuoghi’s paintings, drawings, sculptures and animations explore the notions of metamorphosis, hybridity and devotion.

Known for his legendary transformation into a 67 year old man for seven years when in his twenties, Roberto Cuoghi is one of today’s most mysterious and radical artists. Concepts of perpetual experimentation, rule breaking, continuous and processual learning are central to his work: From il Coccodeista (1997), a series of works born from the artist’s idea to spend days wearing glasses whose lenses had been replaced by Pechan prisms, inverting and reversing his vision, to his intensive two-year study of the Assyrian language and rituals, after which he made a giant reproduction of a small talismanic statue of the menacing demon-god Pazuzu (Pazuzu, 2008) and a hybrid sound installation combining music of western and non-western cultures; (Šuillakku— corral version, 2014). More recently, Cuoghi combined sophisticated 3D technology and unpredictable archaic firing techniques to create an invasion of ceramic crabs on the island of Hydra, Greece (Putifiero, 2016).

This retrospective is part of a wide curatorial project initiated by the Centre d'Art Contemporain, Genève, which will bring together, in addition to this retrospective, other exhibitions in Europe: At the Madre Museum, Naples, Italy 15 May – 11 September 2017), Kölnischer Kunstverein, Cologne, Germany (14 October – 17 December 2017).

The artist’s first comprehensive monograph will accompany the exhibition. This richly illustrated 500 pages catalogue, published by Hatje Cantz, will include new essays by Andrea Bellini, curator of the exhibition, as well as Andrea Cortellessa, Anthony Huberman, Charlotte Laubard and Yorgos Tzirtzilakis in addition to a compilation of previous interviews, specially commissioned drawings by FOSCA (also shown at the 4th floor of the Centre during the exhibition) and a complete chronology and bibliography by Sara De Chiara.