...a multitude of soap bubbles which explode from time to time... 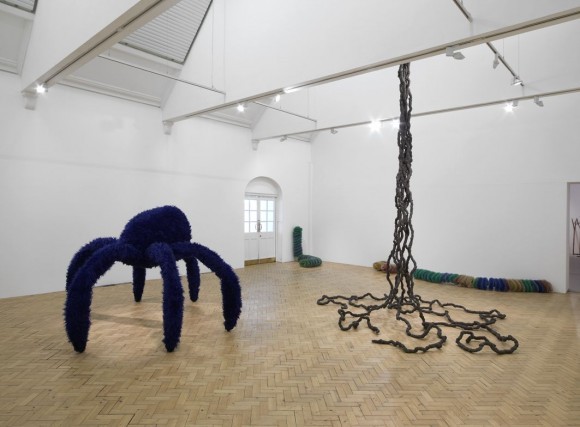 This exhibition, the first dedicated to Pino Pascali in the UK, focuses on works from 1967 and 1968, the years in which Pascali became associated with Arte Povera, the radical trend in Italian art where everyday materials were used in resonant combinations and in which events in art and life appeared to converge.

The core of the exhibition is a series of works from Pascali’s one-person presentation at the XXXIV Venice Biennale in 1968. The show closed when the artist withdrew his work in response to student protests and the actions of the police. He died later the same year after a motorcycle accident, aged 32.

Using materials such as steel wool, coloured fun fur, feathers and straw, Pascali created visually exciting and texturally appealing sculptures, demonstrating his complexity as a maker. His creations propose a playfully serious reconstruction of the universe. In this exhibition is a hairy mushroom, a giant spider covered in blue fun fur, large-scale coloured acrylic brushworms and a shield pierced by eagles’ quills.

Contradictory notions of reality and artificiality come together in his use of synthetic materials and the prime natural elements of water and earth. Pascali also used the direct expression of his own body through performance and by manipulating the forms of his sculptures to set-up dialogues with the audience.

Pascali believed in tapping the alternative realities of myth, memory and the imagination expressed in play. He sought never to repeat the same work and thought that art should be superseded by new forms and ideas in the manner of a snake shedding skins. Although over 40 years old, this work and its restless energy are fertile ground for thought and imagination today.

SKMP2 (1968), a film by artist Luca Maria Patella and featuring a number of individuals associated with Arte Povera including Jannis Kounellis and Pino Pascali, will be shown in the reading room.

The exhibition has been initiated and selected by Martin Holman and is supported by The Henry Moore Foundation and the Pino Pascali Exhibition Supporters Group.
www.camdenartscentre.org