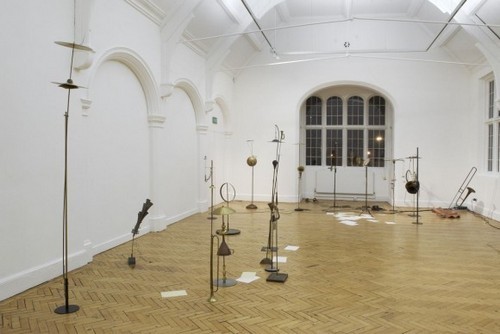 Berlin-based artist Katja Strunz’s first solo exhibition in London presents a new installation that has evolved from Strunz’s reaction to the space – in particular the sound which resonates from the road outside.

A group of figurines or ‘musicians’ made from found objects, including candlesticks, Turkish ashtrays, cymbals and hotel reception bells, bring to mind an alternative brass band, or a quizzical audience, as they survey the rest of the exhibition and occasionally show their appreciation of it. Collectively titled ‘Parasols’ these figures resemble plants, mushrooms or umbrellas, referring to what Strunz has termed an ‘archaic form, the basis of a home, which shields a place, protecting it from the outside, perhaps from the sky, a flash, a divine light or an idea.’

Strunz works with the resonance of history, what she has called ‘aftermath’, and with the enfolding of time and space. Using outmoded curiosities, and employing various techniques, such as collage and mimesis, Strunz’s installations and sculptures act as trauma or memory; disrupting our linear perception of time.