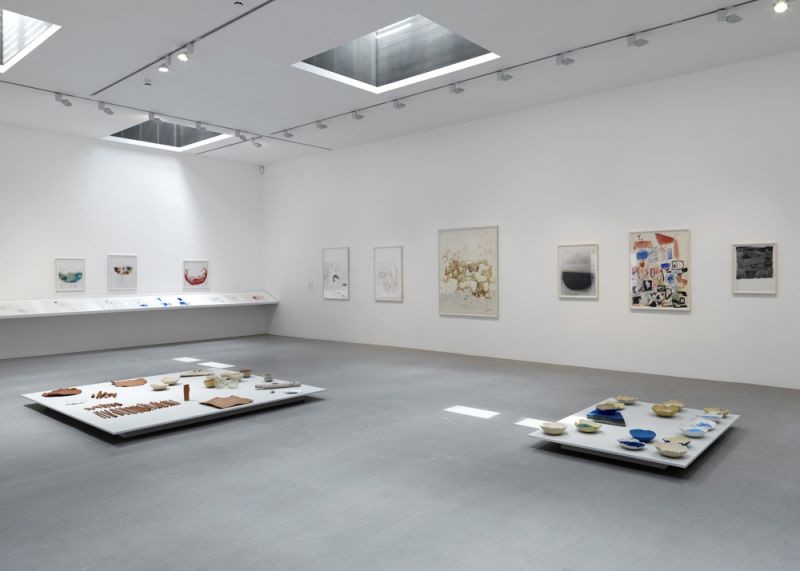 Nature and its ephemeral magic are the focus of a major exhibition of work by influential British artist Shelagh Wakely (1932–2011). Across all the galleries and the garden, the exhibition brings together works spanning the breadth of media Wakely worked with, including print, video, unfired clay sculptures, ceramics and exploratory drawings.

Wakely was a pioneer of installation art – at a time when many of her contemporaries in the UK were making bold, sculptural work, her practice was characterised by a delicate touch, tracing the shifting behaviour of light and observations of nature. Using organic materials inclined to weathering and deterioration, her sculptures conjure a sense of temporality and movement, in which seemingly simple images and forms evoke emotional and sensual experiences. Particular attention is paid to the thresholds between things; vessels, studies of negative space and aromas permeating boundaries between people and objects. Much of the work has been drawn directly from Wakely’s studio, including material experiments, working drawings and found objects, conveying the vitality with which she engaged with the world through making.

Wakely’s creativity was inspired and defined by the time and place where she worked. She spent long periods in Brazil, where she collaborated with artists such as Tunga and Tatiana Grinberg, who have been invited to offer guidance for this exhibition.

Conversation Pieces
In the garden, Wakely's work is brought into conversation with artists with whom she shared creative concerns during her lifetime, such as Richard Deacon, Susan Hiller and Alison Wilding. In 1982, Wakely curated an exhibition at Camden Arts Centre, Sculpture in the Garden, which included the work Wilding is recreating. Inspired by Wakely’s own garden in North London and a commission she undertook for St George’s Hospital in Tooting, an area will be devoted to plants with medicinal qualities, such as angelica, caraway, chervil, parsley and anise.

The exhibition has been developed with Wakely’s friend and collaborator, the Brazilian artist, Tunga, along with fellow artists Tatiana Grinberg and Antoni Malinowski and writer Sarah Kent.

With additional thanks to Gustafson Porter LLP
www.camdenartscentre.org