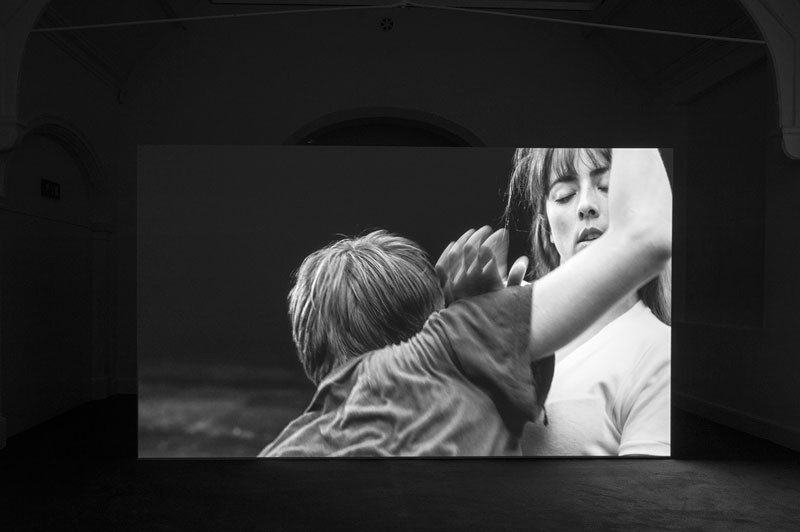 British artist Simon Martin (b.1965) presents UR Feeling – a new film and a poster. In his previous work, Martin has focused on isolated objects such as the Louis Ghost Chair designed by Philippe Starck, a Donald Judd sculpture and a room divider by post-modern design group Memphis, to examine how we look at things and their representations. In this film, he collaborates with performers for the first time, to consider how people feel in response to the inherent architectural codes of the built environment and how the social history of a place can produce particular affects.

Moving away from an explanatory or analytical mode of address, this film is wordless and does not set out to convey meaning through representation, but to illuminate experience through the senses. Placing emphasis on mood and embodiment, an immersive soundscape includes field recordings from the Wapping Old Stair on the River Thames and samples of a reconstructed Lyre – thought to be the oldest stringed instrument, excavated from the ancient site of the Mesopotamian city Ur.

The performers respond to a number of scenarios which were proposed as image-based exercises, visual ‘clues’, forming the basis of a choreography. These images are derived from ideas about the body in relationship to situation, apprehension of context, buildings or objects. They are named: Site 01, Site 02, River, Portrait, and Corner. Working with artist and Butoh-trained dancer Nissa Nishikawa and Martin Tomlinson, these commands are actualised in improvisatory performances in which their bodies are moved by images in the mind’s eye, taking their cue from imagined environments and the reciprocal landscapes of affects and sensations they evoke.

In 2012 Simon Martin had a solo show at Camden Arts Centre that was also called UR Feeling. In it he brought together objects and images by artists and designers including Ettore Sottsass, Richard Artschwager and Stephen Shore. That exhibition might be seen as a ‘preview’ or speculative exploration of ideas from which this new film has emerged.

UR Feeling takes its direction from a quote by architect Peter Eisenman in conversation with Charles Jencks. In it he outlines a situation in which a human subject might feel something unfamiliar or uncanny. A site such as Paternoster Square (the area surrounding St. Paul’s Cathedral), has been continuously occupied for centuries yet in spite of perpetual cycles of demolition and redevelopment it still retains the narrow passageways of a medieval city plan and somehow evokes the feeling of a medieval situation in the present day. UR Feeling emerges from this ambiguous state between knowing and sensing, drawing attention from the mind to the body as it experiences the persuasions of its situation.

Simon Martin (b.1965) lives and works in London. His solo exhibitions include Northern Gallery for Contemporary Art, Sunderland (2013); Camden Arts Centre, London (2012); Bass Museum of Art, Miami; Chisenhale Gallery, London; and Lightbox, Tate Britain, London (all 2008). Recent group exhibitions include The Parliament of Things, First Site, Colchester (2015); The Event Sculpture, Henry Moore Institute, Leeds (2014-15); Glasgow International, Kelvingrove Art Gallery and Museum, Glasgow (2014); The Imaginary Museum, (with Ed Atkins), Kunstverein Munich; and How to Look at Everything, The Common Guild, Glasgow (both 2012); British Art Show 7: In the Days of the Comet, Hayward Gallery and CCA Glasgow / Tramway; and This is Sculpture, Tate Liverpool (both 2011). He was the recipient of a Paul Hamlyn Award (2008) and shortlisted for the Jarman Award (2009).

This exhibition coincides with a new monograph which spans the trilogy of film works that began with Carlton, includes Louis Ghost Chair, and concludes with this new film UR Feeling.