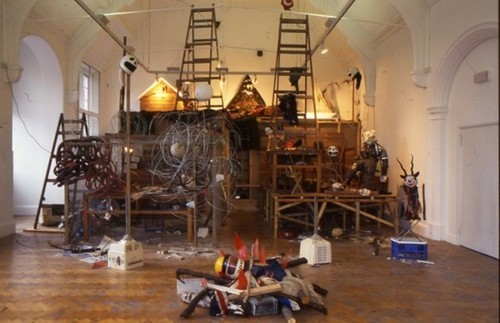 Part of ‘Cutting the Wires’, a series of commissions, residencies and presentations by artists in whose work the idea of a fiction or a narrative emerges, Nelson’s ‘Studio Apparatus’ developed over a number of weeks whilst working as an artist in residence. Collecting detritus from streets and markets, he gradually transformed Gallery 3 into a tableaux, creating a personal fictional context within the gallery space.
SIMON STARLING: NEVER THE SAME RIVER (POSSIBLE FUTURES, PROBABLE PASTS)

A new exhibition curated by British artist Simon Starling, the latest in a series of artist-selected shows. After completing a residency at the Centre in 1999, Starling returned in 2000 with a solo show. He was the winner of the Turner Prize in 2005.

Never The Same River (Possible Futures, Probable Pasts) will bring together works by 30 artists and designers, revisiting the rich history of the Centre by showing fragments of exhibitions from the past 50 years. These works are reinstalled in the exact positions they previously occupied and Starling has selected new works by artists as an imagined future for the Centre's exhibition programme.

The ideas and methods used by Starling in his own work, as well as the writings of Jorge Luis Borges and George Kubler, form the premise of the exhibition. The works, though spatially and historically remote all, in themselves, push and pull at our understanding of linear time. Their coming together invites us to consider how artworks prevail amidst the procession of historical change.

Mike Nelson returns for a four-week period to recreate his seminal work A studio apparatus for Camden Arts Centre; an introductory structure: Introduction, a lexicon of phenomena and information association, futurobjectics, (in three sections), mysterious island*, or Temporary monument, originally made during his residency in 1998. The completed work can be seen in Never The Same River. The project and residency are supported by Outset Residency Fund.

The exhibition is supported by The Henry Moore Foundation, Culture Ireland and Computer Aid International.
www.camdenartscentre.org