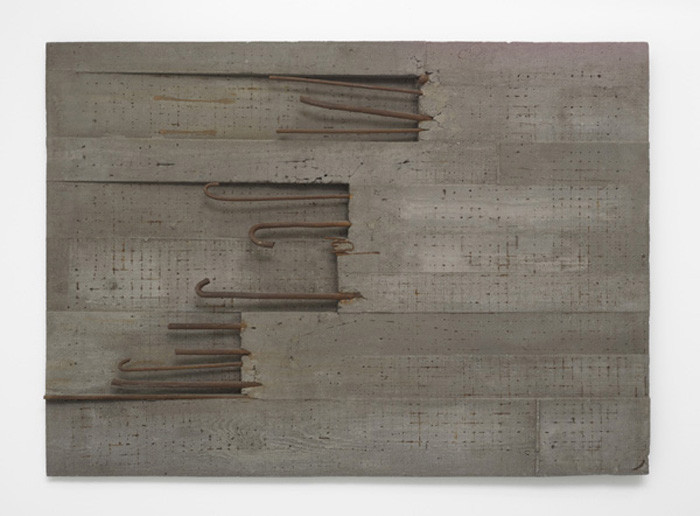 The exhibition, which has been developed at the two exhibition venues in Paris and London, is intended as a single project. The absent expository position is “limbo” and appears in time as a poetic trace.

The exhibition draws its inspiration from Ugo Mulas’s Dormitorio Pubblico.
The photograph, belonging to a series made in the early 1950s,and dedicated by the photographer to the City of Milan, shows a dormitory in perfect order after its occupants have left. Mulas’s intent was to produce a photographic archive of his city, dwelling on the relation between the morphological structure of the urban fabric and the things and people inhabiting it, and lingering, above all, in the artist’s own words, “on what is not known; i.e. the interiors, the houses, what is not seen or what people do not want to see, or do not want to be shown [...] photographing all this without people; because what strikes us most when we enter a place is the fact that it is frequented, it is the people. [...] I would like there not to be any people, I would like the protagonist to be a certain load-bearing structure that we call city, an unarticulated structure, which bears an anonymous throng [...] a sort of ‘limbo’”. The exhibition will focus on the trace to which the photographer turns his attention in his thinking. He in fact projects a removal of human presence which, despite this, remains in the form of a residual sign and something latent, and which, albeit fragile and almost imperceptible, is capable of adding meaning and reinstating a significant datum to the image.
The expository project suggests a reconsideration of the act of removal which the photographer declares he is carrying out. The cancellation, or the simple omission, of what is regarded as superfluous, secondary or merely descriptive—the dormitory’s occupants are not present in the image—prompts the rediscovery of the objecthood of the image to the point of an abstract-like exacerbation. This kind of reflection creates an affinity with the intention to reconsider the frame as a sculptural body. By removing any trace of pictorialism, Giuseppe Uncini’s reinforced cement surfaces are reduced to the primary essentialness of the material used. The Cementarmati, in the total nakedness of their material being, nevertheless reintroduce, together with the indistinct monochrome surface, the trace and remnant of a structural and compositional linguistic sign of sculpture. The round iron rods call to mind the constructive sense of the work, and take on the significance of a mental and poetic trace. Uncini wanted his works to become “abodes of things”; he wanted the concreteness of their spatial, poetic and above all everyday being to be capable of taking on “the voids of moods, of poetic moments”... In a word, he wanted “the hollows [and the traces] to become filled with existential adventures”.

The 1970s were particular because of the experiments conducted with materials capable of reinstating an anonymity of artistic praxis. The use of Sicofoil (clear plastic sheeting) in Carla Accardi’s work becomes an exemplary illustration of this research and falls into line with the project in the attempt to reabsorb language in a reduction of means. The Sicofoil becomes an authentic radical surface, or else a place in which to accommodate the Sicilian artist’s sign-based experience. As Mulas subtends, the removal is never complete, or even partial, it appears in a latency which becomes a distinctive sign for some artists. From the early 1970s on, Carol Rama has been producing a series of works with air chambers and electric cables which, as autobiographical elements, open up a symbolic type of narrative. In this phase in the show we have La guerra è astratta, 1970 and Immobilità di Birma, 1978. The bricolage itself present in the works imposes a reflection about the sense of fragmentation itself of the art object, which, in a formal devourment is reduced to “combinations “ of parts. The works of Marisa Merz convey the poetic enigmaticness of the oscillation of presence and absence. If, on the one hand, the reinforced cement block titled Waiting, 2011, produced by Lara Favaretto, exhorts reflection about the reduction of the work to an objecthood, underscored by the geometric volume and the very anonymity of the material used, on the other hand it invites the eye to discover the hidden sign within it. If the disorienting and ironical work of Vedovamazzei, titled L’eredità di mio padre, 2011, is the “residual” trace of an autobiographical memoir, Emmanuelle, 2009, by Santo Tolone, reintroduces physical sensuality to the form to which the profiles have been removed.

It is the intent of Dormitorio pubblico/Public Dormitory to come across as an evocative project: like a dormitory, it imposes a general and forced cohabitation. Mulas’s dormitory is also a nostalgic place, and it becomes the declaration of a space of presence-with-others. Last of all, Luciano Fabro and Alessandro Piangiamore offer reflections about places of artistic experience. With the historical work Tubo da mettere tra i fiori, 1963, Fabro constructs a space which can house his trace, and with the likewise historical work Pavimento, Tautologia, 1965, he makes an aesthetic reflection about space, through the time-based trace, while Piangiamore, conversely, with Una conchiglia vuota gocciola su un pavimento di cemento, 2011, invites us to mentally reconstruct the partial image we can see in the show.
www.campolipresti.com