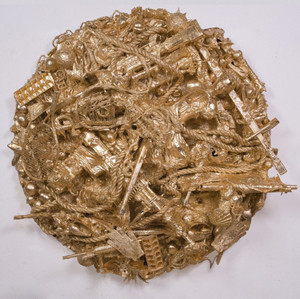 I had the feeling that something was missing.
I don't know what, but when it was over,
I said to myself, Is that all there is to a circus?

John Miller's current show at Sutton Lane takes its title from the well known existentialist lament that Peggy Lee recorded in 1969. In turn, Thomas Mann's short story "Disallusionment" had inspired Lieber and Stoller's song. On view are three reliefs, three carpets and wallpaper. The reliefs feature conglomerations of vernacular objects such as toy guns, costume jewelry, fake fruit, sea shells and sports equipment. All these things have been painstakingly covered with imitation gold leaf. Miller has titled the reliefs "The Edge of Night", "A Hypnotic Effect" and "Lost Years". These titles refer either to soap operas or to minimal art. Miller had the carpets cut from remnants. He ordered the wallpaper online. Writing in Texte zur Kunst, No. 70, Daniel Emmanuel ("artistic advisor to the Schlomo Foundation") observed that, "Miller's use of objects and images hinges heavily on an alchemic transmutation of low culture and subcultural codes into concerns generally believed to be posed by high culture, namely how class and aesthetics interact to define beauty and the sublime".
John Miller (born 1954, Cleveland / Ohio, USA) is an artist, writer and critic. He lives and works in New York where he teaches at Columbia University's School of the Arts. In 2000, JRP Editions in Geneva and the Consortium in Dijon jointly published a collection of his writings: John Miller: The Price Club - Selected Writings (1977-1998), edited by Lionel Bovier.
John Miller's work is featured in collections of institutions such as The Whitney Museum of American Art, the Museum of Contemporary Art in Los Angeles, the Carnegie Mellon Museum in Pittsburgh and the Cabinet des Estampes in Geneva.
www.campolipresti.com