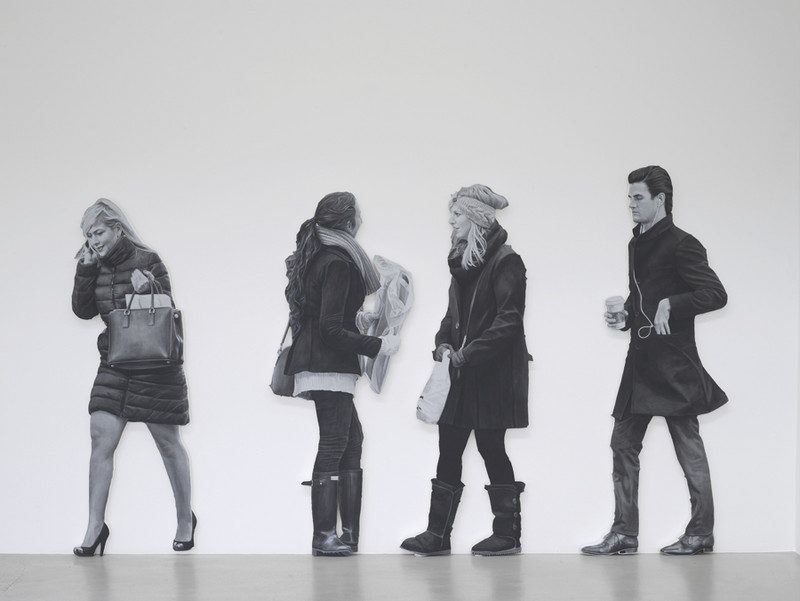 Campoli Presti is pleased to present Counterpublics, John Miller's third exhibition with the gallery. Here the artist contrasts two kinds of images: those derived from “The Price Is Right,” a long-running television game show and those of pedestrians shot by the artist himself. This juxtaposition prompts questions such as what constitutes a public and what kind of space can it be said to inhabit. In this way, the exhibition continues Miller’s investigation of repressive aspects of Western ideology. Since the end of the 1970s, Miller has focused on the absorption of art into the everyday, a tendency that challenges the function of the author and implies the loss of the artwork’s aura.

Produced by mechanical and digital means, Miller's Game Show paintings transform the shooting stages of television game shows into colourful, nearly abstract landscapes, sometimes deliberately distorted and blurred. The series, which started in 1998, reflects the artist's interest in the iconography of the American middle class and anticipates the increasing importance of self-representation in social media and the construction of reality as a game. He explored these themes more explicitly in his Reality TV paintings.

After his Reality TV series, Miller decided to focus on people in the public space, namely pedestrians on street corners. He derived these images from his photo series, The Middle of the Day – a project he began in 1994, in which he captures images between the hours of 12 and 2 pm. In this framework, Miller aims for a kind of candid social portraiture. If, in reality TV, subjects inevitably perform for the camera, here most individuals are unaware of it, generating an ambient or multi-directional attention. The groups Miller depicts resist idealization, in part because their interactions unfold indifferent to the aims of production and utility.

While the Game Show paintings could be understood as photography disguised as painting, in the Pedestrian series the transition goes from photography to painting, which accounts for the fracture between spontaneity and labour. These works concern the fugitive, the ephemeral, the contingent, rendering otherwise insignificant details which produce the effect of realism. Their shapes as cut-out tableaux reinforce this aspect. In conjunction with this, Miller deploys a particular grisaille technique carried over from his Reality TV paintings in which he mixes a fair amount of grey into all the colours. By reducing the range of values ordinarily found in realist painting, this palette imposes a limit on the realist effect and puts the rendering involved at one remove.

John Miller made the House Drawings displayed on the ground floor in conjunction with his brown impasto works from the late 80s and early 90s. The first phase of the brown works centered on bodies and body parts, a second, on landscapes and geology. The house drawings were developed in the second phase. These works suggest a sense of architecture that is apperceptive, haptic rather than visual. Despite its scale, when the building becomes part of the landscape, it can disappear through habituation. The permanent nature of architecture is questioned, as well as the allegorical motif of the ruin.

John Miller has an upcoming solo exhibition at the ICA Miami in 2016 and his work will be part of Painting 2.0, Expression in the Information Age at Brandhorst Museum, Munich opening this November. Miller is the recipient of the 2011 Wolfgang Hahn Prize, which coincided with a solo exhibition at Museum Ludwig, Cologne. In 2009 Kunsthalle Zürich held a retrospective exhibition of his work. He has participated in major group exhibitions at Swiss Institute of Contemporary Art, New York (2014); Hayward Gallery, London (2014); The New Museum of Contemporary Art, New York (2013); Palais de Tokyo, Paris (2012); CAPC, Bordeaux (2010/11) and Museo Nacional Centro de Arte Reina Sofia, Madrid (2010). Miller’s work was included in the 2010 Gwanju Biennale in South Korea and in the 1991 Whitney Biennial in New York.
www.campolipresti.com