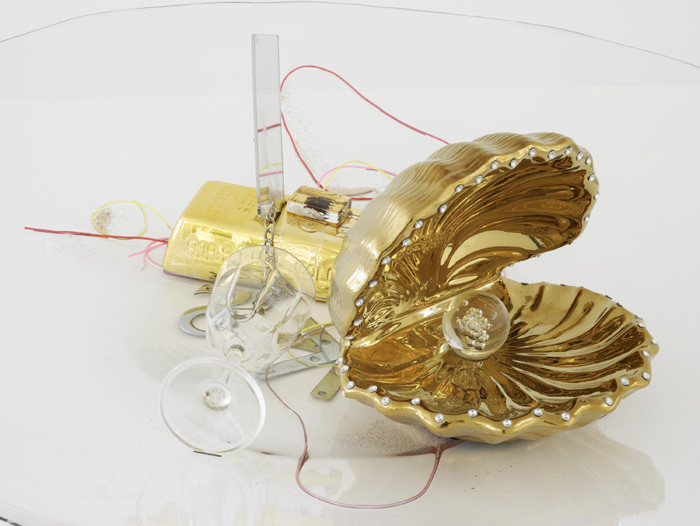 Campoli Presti is pleased to present Jutta Koether's third solo exhibition with the gallery.
The Double Session is part of an on-going performative reading of Jacques Derrida's 1969 lecture of the same name.

Koether has already explored Derrida’s idea of doubling within the artist’s Marriage Paintings - presented this year at Dundee Contemporary Arts and currently on show at Arnolfini, Bristol. By reproducing the subject again the artist relates it to the philosopher’s comments on Mallarmé’s mime, where the supplement constitutes the original and denies the difference between a first and a secondary truth.

Unorthodox, unruly readings and other strands of theorizing in and through painting have informed a specific kind of production within Jutta Koether’s practice.
Although the format of this production for The Double Session is mainly sculptural, painting is present in a deconstructive, fluid way.

Viktoria (2013) and Luise (2013) are two works that each comprise hand-shaped basins that contain gift shop jewellery, bugs, glitter, faux-gold bars, and glass objects that float stranded in clear liquid acrylic. Streaks of colour on torn canvas strips serve to hint at painting and (what Derrida would term traces) hold within themselves the mark of a past element already marked by a relation to a future element. Mirrored walls behind Viktoria enforce a doubling of the viewer and object – prompting us to consider the literal framework through which we see and interpret the work.

Suspended in mid-air, Isabelle (2013) is a depiction of a large phallus of exaggerated proportions that are furthered by the appropriate shape of the paper and frame. Pointing from one room to another the phallus has similar dimensions to the sculpture that Louise Bourgeois holds in Robert Mapplethorpe's iconic portrait that evokes the same outspokenly and humorous approach towards the phallic object.

Within the gallery’s stairwell, Koether has positioned a group of ‘plank paintings’ of which can potentially be positioned (viewed) horizontally as well as vertically. In the past, similar planks have constituted performative objects and here they continue their role to be physically negotiated escaping their pictorial limitations. The Double Session considers painting as an unresolved category, a broader praxis. The meaning itself of painting disseminates, as it generates an irreducible and generative multiplicity of semantic effects. It does not rely on oppositions between original and version, natural and artificial, masculine and feminine, but rather on their re-articulation.

Jutta Koether lives and works in New York and Berlin. Her work forms part of the permanent collections of MoMA, New York; the Musée d'art moderne de la ville de Paris; Museum of Contemporary Art (MOCA) in Los Angeles; Nationalgalerie in Berlin and Kunsthalle Bern. The Arnolfini in Bristol (UK) is currently presenting a solo exhibition of the artist’s work. Koether has had solo exhibitions at DCA – Dundee Contemporary Arts (2013), Moderna Museet in Stockholm (2011), Bergen Kunsthall in Norway (2008), Kunsthalle Bern in Switzerland (2007) and Koelnischer Kunstverein in Cologne (2006). She was included in the Whitney Biennial in 2012 and 2006 and in last year's Sao Paulo Biennial. Jutta Koether is currently a professor at the Hochschule für Bildende Künste in Hamburg.
www.campolipresti.com