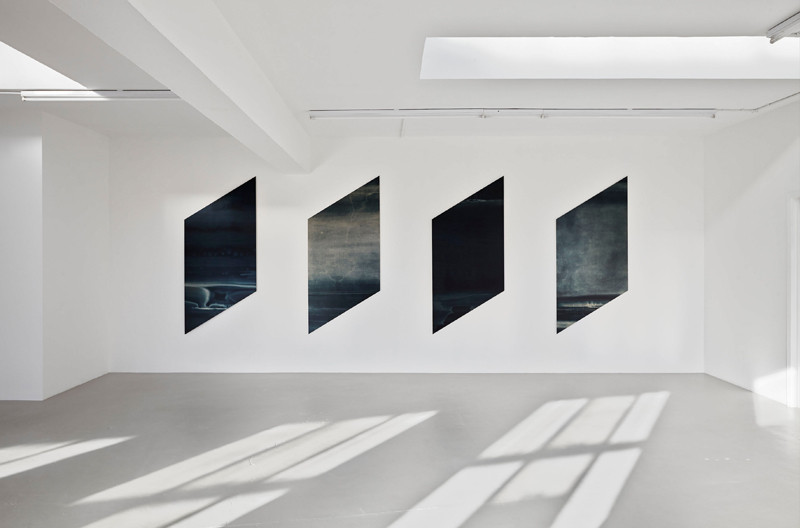 In his 1931 “Short History of Photography” Walter Benjamin refers to the French physicist and astronomer François Arago’s speech of 1839 on Daguerre’s invention of photography. Arago’s address, to the French chamber of deputies, recognized the breadth of the new medium - challenging the limited scope often bestowed on it.

The broadening of the photographic discourse is at the core of Liz Deschenes’ artistic practice. Since the early 1990s she has produced photographic work that explores the material condition of the medium and its processes. Deschenes’ work sets up a correlation between the photograph-as-object and the environmental conditions it operates in, and is increasingly concerned with architectural and historical contexts of exhibition display.
Spatial factors and tangible conditions of display become inscribed in the physicality of the artwork rendering the photograph as a framing-device that intends to ‘bracket’ the space and activate the viewer.

Bracket (London), Deschenes fifth solo exhibition with the gallery, yields the output of early photography pioneers Louis-Jacques-Mandé Daguerre and William Henry Fox Talbot as its subtext with a new series of photograms. In the late 1830s both Daguerre and Talbot had developed means to permanently capture the images they saw in a camera obscura by using light and chemistry. The daguerreotype is a unique image on a polished, silver-plated, iodine-treated sheet of copper that is developed with mercury and fixed with salt water. Talbot’s first camera pictures used fine paper coated with silver nitrate and fixed with a salt solution. Both inventors initially produced unique photographs that prominently featured still lives and studio interiors.
The exhibition addresses these similarities of the French and Anglo perspectives in lieu of their differences by physical and geographical measures. Deschenes collapses the two approaches into multi perspectival, sculptural works questioning established ways of interpreting the inventions and histories of photography. The exhibition’s second part Bracket (Paris) will present a reconfiguration of the Stereographs earlier shown at Secession, Vienna thus temporally and spatially building “a narrative across and between places”. 1

Liz Deschenes lives and works in New York. Deschenes’ work will be the subject of a solo exhibition at the Walker Art Center in October 2014.
Recent exhibitions include a solo exhibition at Secession, Vienna; the Whitney Biennial 2012 and Parcours at the Art Institute of Chicago with Florian Pumhösl. Her work is part of the permanent collections of Centre Pompidou, Paris; MoMA, New York; Whitney Museum of American Art, New York; The Metropolitan Museum of Art, New York; The Walker Art Center, Minneapolis; The Art Institute of Chicago; Hirshhorn Museum and Sculpture Garden, Washington D.C; Corcoran Museum of Art, Washington D.C. and CCS Bard Hessel Museum, Annandale-on Hudson.
Deschenes teaches at Bennington College, Vermont and is a Visiting Artist at Columbia University, New York.

1 Johanna Burton, Because There is No Decisive Moment, Secession catalogue, p.18.
www.campolipresti.com