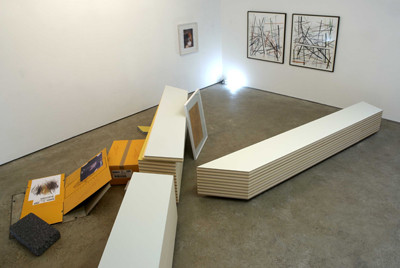 Sutton Lane is pleased to announce simple agony by Scott Lyall, the first solo exhibition of the artist's work outside America. The exhibition presents a metrical distribution of varied elements, including quasi-sculpture, painting, graphic design, and colour photography.

'Simple Agony' is also the title of a poem by Jules LaForgue, written in Paris in 1869, before the 'abstract' revolution. But already present within the poem is the dual subject of high modernism: a work committed to both the imagery of fading romantic aspirations, and the graphic condition of language within an evolving world of abstractions. Lyall highlights this division within the heart of modern poetry to both account for and extend the two dimensions of abstract painting. One notices in his work a kind of analytic constructivism in which the medium is reduced to a distribution of cultural signs; but, there is also an excess of lyrical gesture and painterly value that seems to incessantly want to incorporate (or maybe redeem) a fleeting subject. No meta-language exists to enable the viewers in the gallery to grasp and consolidate these two dimensions from a neutral critical standpoint. This is not because the dimensions are simply opposite or incompatible, but because they are knotted inextricably, and always impede on one another. A sensuous meter has been installed within the rational construction, while the scheme of the latter intervenes and seeks to contain the flickering objects.

But it is thus that one encounters the simple agony of Lyall's title. If an agon describes the conflict within its dramaturgical setting - a core of inconsistency around which sentiment and rational perspectives must mutually circulate - then this is also the (absent) principle that guides Lyall's definition of abstraction. The show's elements were prepared autonomously on the interface of a computer, and first appeared as screen graphics before they were cast as display objects. This condition of coming from nothing (except a compressed field of information) is both a repetition and a travesty of historical notions of art's autonomy. But historic reference is produced as the sign of a virtual past only. It's just the potential for recollection and speculative thought in this ensemble.

To aid him in his process, Lyall includes images of his 'Assistants', a set of self-portraits made by strangers, posted via cell phones to various web sites. These are the fragmentary images from a virtual community of the anonymous, but they help to 'soften' the hard abstractions by which the show has been assembled. And, like every element of Lyall's production, they only exist within the time-frame of their presentation. This is an art that wants to present us with the simple motifs of its development, linking the figures of a shattered and irredeemable abstraction to (each of) its multiple, provisional and highly speculative places.
www.campolipresti.com