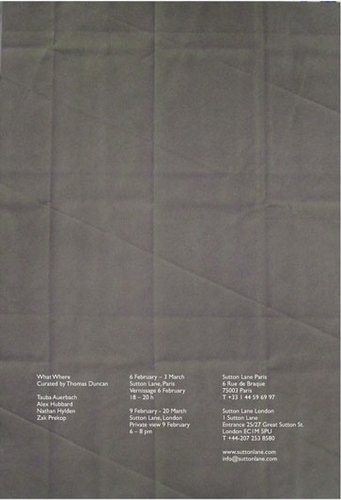 WHAT WHERE
Curated by Thomas Duncan

Sutton Lane is pleased to announce What Where, an exhibition of paintings by Tauba Auerbach, Alex Hubbard, Nathan Hylden and Zak Prekop. The exhibition explores the continuing investigation of painting, narrowing its focus on multiple disciplinary practices concerning the traditional medium and the vicissitudes of such an undertaking. The title What Where, taken from Samuel Beckett's final dramatic work, highlights the paintings' indeterminacy or lack of easy categorization as well as the viewer's inability to see the exhibition as a whole at any given time. The artists brought together here - though not all exclusively painters - share a methodical, process-based approach that emphasizes ascetic optical poetics, openness to mediated dealings with the format as well as minute attention to the material constructs of painting.

The exhibition deals not so much with the concept of abstraction but rather investigates painting as a functional model in relation to the subjective practices of its creators who utilize this accessible, conventional mode to exploit myriad possibilities within the confining parameters they have set for themselves. The artists gathered here are not specifically concerned with artistic movements or institutional critique; rather they individually seek to manipulate the established boundaries of painting in order to push it in a continual progression forward.

Tauba Auerbach lives and works in New York and San Francisco. She has had numerous solo exhibitions since graduating from Stanford University, California. Her work will be included in the upcoming 2010 Whitney Biennial and has recently been seen in the SFMOMA exhibition for its SECA Award, of which she was a recipient. Recent group exhibitions include New York Minute at the Macro Museo D'Arte, Rome, Italy, Fax at the The Drawing Center, New York and Younger than Jesus at the The New Museum, New York all in 2009.

Alex Hubbard lives and works in Brooklyn, New York. The artist will participate in the upcoming 2010 Whitney Biennial. His solo exhibition Somebody had to do it is currently on view at Maccarone, New York. He presented a two person show alongside Oscar Tuazon at the St. Louis Museum of Contemporary Art in 2008. His work was included in group exhibitions at the Jumex Collection in Mexico City (2009), Palais de Tokyo, Paris (2006), the Whitney Museum of American Art at Altria (2006), and Centre Culturel Suisse, Paris (2003).

Nathan Hylden lives and works in Los Angeles. He has had solo exhibitions at Richard Telles Fine Art, Los Angeles in 2009, at Johann König, Berlin in 2008 and at Art Concept, Paris in 2007. His work has featured in group shows such as STUFF: International Contemporary Art from the Collection of Burt Aaron, Museum of Contemporary Art Detroit, Michigan (2007), Fit to Print at Gagosian Gallery, New York (2007), Post Rose: Artists In and Out of the Hazard Park Complex at Galerie Christian Nagel, Berlin (2007) and Pose and Sculpture at Casey Kaplan Gallery, New York (2006).

Zak Prekop lives and works in New York. He studied with Michael Krebber at Städelschule, Frankfurt a. M. His work will be included in the upcoming group exhibition Spontaneous Generation at Zach Feuer Gallery, New York. He has had a solo exhibition at Shane Campbell Gallery, Chicago (2008) and a two person show with Jon Pestoni at Lisa Cooley Fine Art, New York (2009). He has shown in group shows at Roger Björkholmen Galleri, Stockholm (2009), The School of the Art Institute of Chicago and CRG Gallery, New York.
www.campolipresti.com