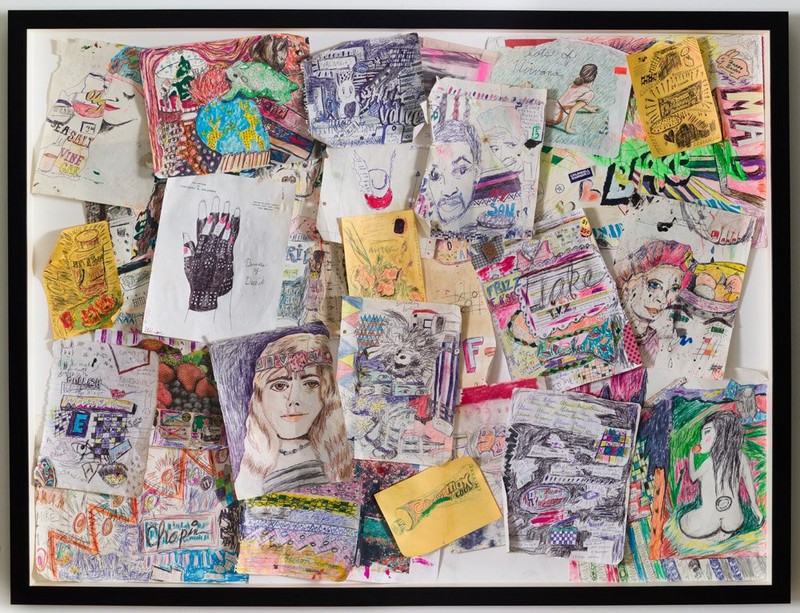 CANADA is pleased to present Purgatory Emporium, Alicia Gibson’s first solo exhibition in New York City.
Gibson’s paintings are imbued, paradoxically, with so much sentimentality and rigor that they throw you off-kilter and force a reconsideration of your stake in the moment. Remember high school? Those first moments when you sat there looking straight ahead while some tired adult drones on about topics barely disguised as something interesting, and still you sit there pen in hand documenting thoughts and flavors, friendships and crushes, idols and kittens. In your agenda with its plasticized burgundy cover you’ve secreted your personality and privacy; within it you list your friends, their phone numbers, the places you plan to go. Shopping malls with jewelry carts where you practice shoplifting dinky treasures. I’m not sure what it’s like now, maybe these rites of passage have changed.
Let us take you back, or maybe if you were never there, let us explain it to you. What it means to be a girl who is imprisoned by the institution, the rules, a particular length of skirt you can get away with before expulsion or detention. Maybe you can hide a t-shirt with some image on it underneath the white shirt of your uniform? Everything else is swirling inside the mind and desperate to get out. When you get to art school there is more sitting, but now you’re in an auditorium with huge projections of feminist masterpieces on the wall. All the art by women or men depicting women is analyzed to the point of making everything seem political. In opposition, the reality of working 8-hour shifts stamping tickets at the aquarium. Here we have invention living inside a bell jar, the atmosphere dark and stormy and everyone’s experience symbolic and interchangeable. Every sticker, every admissions stub, every receipt is a memory and in Gibson’s work these signifiers: ‘pink luster’, ‘admit one’, ‘make offer’, ‘straight 2 voicemail’, ‘do over in morning’, describe the feelings and the visuals so perfectly.
We have spent time with Alicia hearing about her experiences that informed these paintings. Each one is rooted in something that actually happened. This isn’t some made-up character being utilized to explore the greater themes of femininity, this is a person, a soul, whose sensitivity is simply more nuanced and profound. She is like a superhero of the Underground, a conduit for angst like one of the Saints. If we knew anything about religion, we'd call her the patron saint of women painters. The paint itself is thick as nail polish four years after its expiry date. The collage of flowers, the portrait of George Sands that you could blink and miss. This particular style she has and the frenetic energy — it should scare you. Because you don’t know what it’s like and whether it’s possible to embrace all this and conceive of it as high art. Because it is so knowing. These paintings are secret, they are a rite—and right-- of passage. Decadently decorated, pitched like a squeezing heart’s scream, the cherry on top, the icing on the cake, the cat’s meow.
Alicia Gibson was born in Manhasset, NY in 1980. She completed her BA at Boston College (2002), with additional studies at The School of the Museum of Fine Arts, Boston (2004). She received her MFA from Hunter College in 2009. Gibson has exhibited widely in New York and surrounding areas, recent exhibitions include Julius Caesar, Chicago and Rachel Uffner, New York. Gibson lives and works in Brooklyn, New York.
www.canadanewyork.com
Edit Canada
Joan Jonas
Haus der Kunst
Munich
Francis Alÿs
Copenhagen Contemporary
Copenhagen
Bruce Nauman
Pirelli HangarBicocca
Milan
Cinthia Marcelle
MACBA
Barcelona
Mona Hatoum
n.b.k.
Berlin
Aichi Triennale 2022
Nagoya
Lyon Biennale 2022
La Biennale di Lyon
Lyon
Bergen Assembly 2022
Bergen
Steirischer Herbst 2022
Graz
8. Biennale Gherdëina
Ortisei
Manifesta 14 Prishtina
Pristina
La Biennale di Venezia
Venice
Documenta 15
Kassel
XII. Berlin Biennale
Berlin
New Museum Triennial 2021
New York
7. Athens Biennale 2021
Athens
Bienal de Sao Paulo 2021
Sao Paulo
Ruhr Ding 2021
Bochum
Made in L.A. 2020
Los Angeles
Manifesta 13 Marseille
11th Berlin Biennale 2020
Berlin
Yokohama Triennale 2020
Yokohama
Biennale of Sydney 2020
Sydney
Bergen Assembly 2019
Bergen
Steirischer Herbst 2019
Graz
Whitney Biennial 2019
New York
58. Biennale di Venezia
Venice
Ruhr Ding 2019
Bochum
33. São Paulo Biennial
Sao Paulo
6. Athens Biennale 2018
Athens
Manifesta 12 Palermo
Riga Biennial 2018
Riga
Liverpool Biennial 2018
Liverpool
Steirischer Herbst 2018
Graz