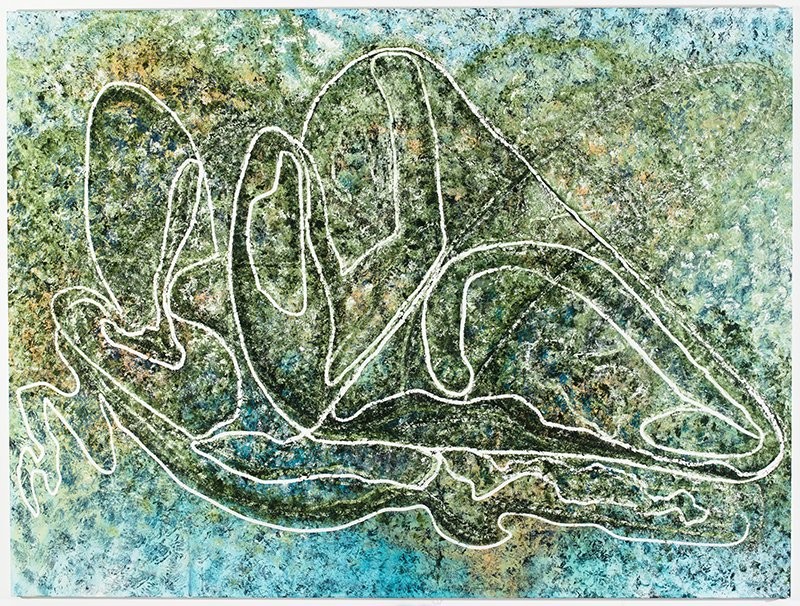 CANADA is pleased to announce that we now represent Daniel Hesidence, whose first exhibition at the gallery, Summers Gun, opened Saturday November 7th. Summers Gun represents a rarity in the supercharged atmosphere of contemporary art, a practice that is slow and stubbornly invested in painting on Hesidence’s own terms. The scale of Hesidence’s achievement is compounded by the fact that Summers Gun represents the final installment of four distinct and fully realized bodies of work that are structured on the seasons. The paintings in Summers Gun are a blossoming of Hesidence’s language, hitting new highs in inventiveness of drawing, timbre, palette and depth of feeling.

The paintings place the viewer into the role of archaeologist or spelunker. One of the unifying properties that runs through the work is a forceful and seemingly archetypal drawing that asserts itself in the foreground of the paintings. However, after looking, one begins to see this is often a decoy or preamble and there is a second or third image that is eventually revealed at their own internal tempos. It is this visual bait and switch that is at the heart of Hesidence’s poetry. The “yes, but...” of the thing beneath or behind that informs and destroys, adding complexity and motion to the paintings. We have to use our senses to determine the situations and ideas that each painting transfers. There is nothing passive or unconsidered in these paintings, yet they seem bracingly open-ended.

The paint is thick, applied out of the tube or off the end of a stick in some fugitive procedure that recalls aboriginal dot painting. The canvases are invested with Monet’s transcendent explorations of pictorial space that is composed primarily in the viewer’s eyes, making us aware of our rods and cones. Like sonograms of the human body, the paintings become instruments to open perception of our collective human circumstance. The murkiness and depth of an electric guitar’s feedback drone or patina left on a well-used tool, the visions come one after another in Hesidence’s paintings like waves on a beach.

The paint stands on end, like capillaries that reach out from the canvas. Paintings are typically two-dimensional, but with Hesidence, the interplay of shadow and graphic structure take you internal or external. The paintings are a meditation on the senses, the possibilities of human comprehension, and our supposed status as captains of our own ships.