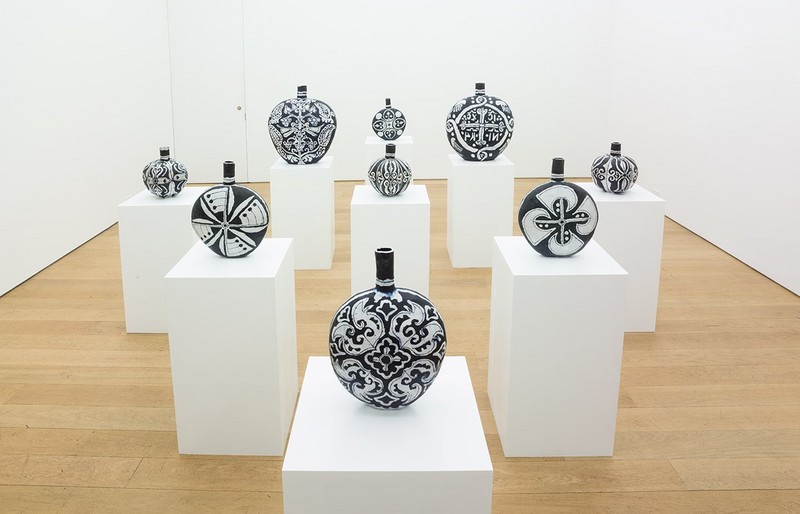 For Ms. Kley's first solo show with the gallery, she will include works on paper, a wall painting, and ceramic pieces that refer to Weiner Werkstatte, Studio Craft and the history of excessive decoration.

Kley takes her title from the famous Shelley poem of the same name about a ruined monument to a long forgotten despot. The poem is set in an unnamed strange locale and its themes include hubris and the inevitable decline of empire. It may seem apt, given the current political climate, to consider history as a series of blustery strongmen who naturally fall into the abyss of time. Kley, on the other hand, offers joy instead of pontification. Here we have unabashedly extravagant designs both mysterious and inviting, weightless manifestations of the past.

Kley’s current black and white ceramic vessels and drawings are inspired by Islamic, Byzantine and Asian historical ornaments and can be described as somewhere between all-over paintings and decorative sculptures. Repeated bold calligraphic patterns are filled with life-giving symbols and designs including flower petals and leafy tendrils.
The vessels are made from hand rolled scraped coils and fired in a large electric kiln in her studio. Decorations are applied using homemade underglazes containing oxides and stains, with wax resist and sgraffito. The artworks are not only beautiful to look at but are also made with an artisan’s care and ingenuity. When colors appear, they are as deep and yummy as a brand new box of crayons. Dripping glazes reveal an appealing unfussy temperament, and forms sometimes seem to imply bulbous fruits like pomegranates or flowers. Although she sometimes renders traditional motifs directly, Kley’s works are rarely strict copies. Instead, they are personal inquiries into visually pleasurable shapes, colors and patterns. Each piece is unique, but also seems to be part of a larger whole.