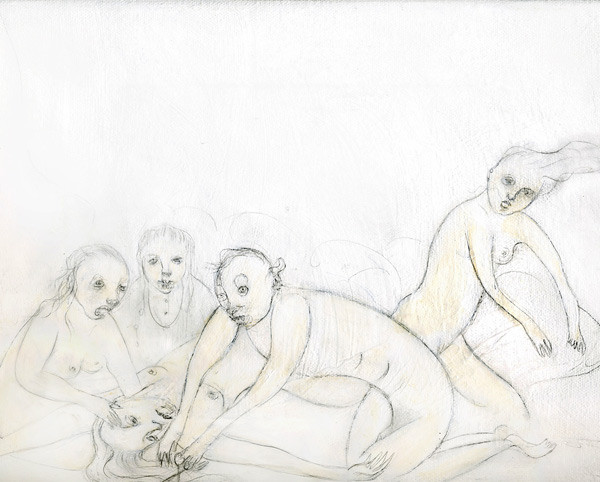 LILLIAN LUDLOW
Every Flinching Atom of Flesh Must Be Flayed

"...SHE SET THERE MOTIONLESS. HER BODY WAS A BLANK CANVAS AND I HAD THE URGE TO TOUCH HER BUT SHE WAS TOO FAR TO BE TOUCH AND TOO CLOSE TO BE REACHED. A WINDOW HAS OPENED AND THE WIND BLEW THROUGH IT. I HEARD ONCE THAT WHEN THIS KIND OF FIRE STARTED IT BURNED DOWN EVERYTHING. IT MUST HAVE BEEN AWFULLY HOT THERE BUT SHE STILL LOOKED FROZEN. HER PALE FACE HAD NO COLOR EXCEPT THE DRIPPING BLOOD FROM HER NOSE. OH, PLEASE, SOMEBODY, DO SOMETHING AND GIVE A KLEENEX TO THIS POOR GIRL-I THOUGHT-BUT THERE WAS NO NEED FOR IT BECAUSE THE DRIP WAS ONLY PAINTED. A DOOR WAS SHUT VIOLENTLY. ON THE SAME BEAT HER OTHER SELF HAS FALLEN OUT OF HER BODY. SLAM...SLAM...SLAM...AND WHITENESS HAS TAKEN OVER AGAIN, JUST AS NOTHING HAPPENED BEFORE EVER OR AFTER. I DON T THINK SHE EVER HAS TOUCHED A GUN BUT THIS GIRL COULD CLEAN A BATHROOM WHITER THAN SNOW....." Rita Ackermann