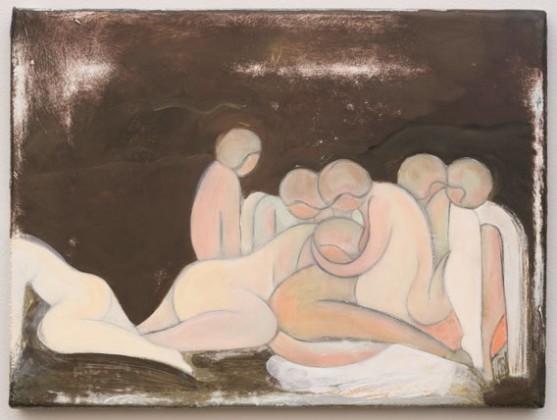 Lily Ludlow has been a friend and artist with this gallery from the moment of its conception. She has provided psychic support and key inspiration for all involved. As a curator, filmmaker and painter there are few people who have contributed as broadly and as deeply to this gallery’s programming and identity.

CANADA has been actively coercing Ms. Ludlow into providing us with a show of paintings for several years. The title “Ten For Aidas” is Lily’s response to her friend and fellow artist Aidas Bareikis’ plea: just make ten paintings.

Her paintings are worked and re worked tablets to faith, love and mysticism. The white chalky surfaces chronicle a search for a human relationship through composition and color. Ludlow’s paintings are written and re written manuscripts honed carefully from an empty blankness to a raptured blush. Layers are built up and lost like seashells in surf. These are faded frescos from some other more perfect architecture where people love better and more often.

As with other way outside women making paintings in a field overpopulated with artsick men, Ms. Ludlow is steadfast in her right to honest expression. These are goddess paintings: Pocohantas in a ray of light doing it. Lily Ludlow’s figures bring us to a world of essential form and radiance. Think the holy glow of Agnes Pelton’s desert paintings made in the years after the passing of the 19th amendment.

Ms. Ludlow grew up in Seattle WA. She studied literature and poetry at Shakespeare and Co. in Paris, and once traveled to Morocco to find Paul Bowles. Lily lives and works in Port Chester, New York.
www.canadanewyork.com