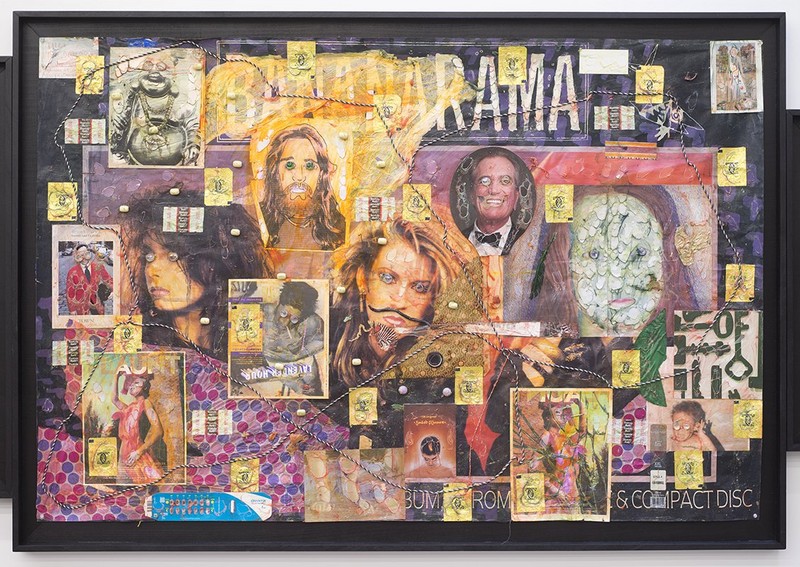 CANADA is pleased to present Skin Game, a solo exhibition by Michael Mahalchick. Mr. Mahalchick’s ability to make something out of nothing is rooted in corporeal materiality, visual puns, and loose conceptual framing. In Skin Game, Mahalchick presents a selection of poster collages, assemblage sculptures, and a series of four performances.

This body of work originated from an abandoned stash of rock ‘n roll posters, found in front of the artist’s first NYC apartment. Mahalchick took fifteen years to synthesize this mind-bending pile of cultural flotsam into art, using the posters as vitrines to host his maximal assemblage works. Mahalchick arranges old candy, food wrappers, marbles, bits of string, bottle caps, exhibition postcards, advertisements for psychic mediums and anything else that washes up on his shore. The heavily-worked collages are covered in a semitransparent latex skin concealing and blistering the poster’s original image, in a state of becoming and unbecoming.

Mahalchick doesn’t mind mocking the status of an art gallery, comparing it to our natural fluctuations of desire and the inexhaustibility of consumer appetite. In the front room, Mahalchick presents a black display rack with silver shower curtain rings and rubber penis-shaped skins, while a large ominous figure with a lard bucket torso and a bondage mask for a head stands at the ready... “are you looking for anything in particular today?” A string of multicolored mummified voles dangle from the ceiling like carnival lights, adding a jaunty tone to the perverse proceedings, while a popular music soundtrack programmed never to repeat a single song plays endlessly.

A series of four performances will take place over the course of the show, the first occurring during the opening reception. Mahalchick offers an update of the Narcissus story, staring into empty latex buckets filled with water while lying facedown on a massage table that once belonged to a deceased friend. Through this act and his self-reflexive stare, the artist will produce an edition of four image-infused water works, which are meditations on the magical, evolving nature of identity.

In spite of the cultural commentary, the work is not particularly moralistic. The work never feels angry, it just doesn’t prioritize light sentiment over dark. It presents a consumerist nightmare and a liberated paradise that subverts codes of retail, transmitting a highly idiosyncratic vision of the role of the individual within a status-fueled, capitalist society.
www.canadanewyork.com