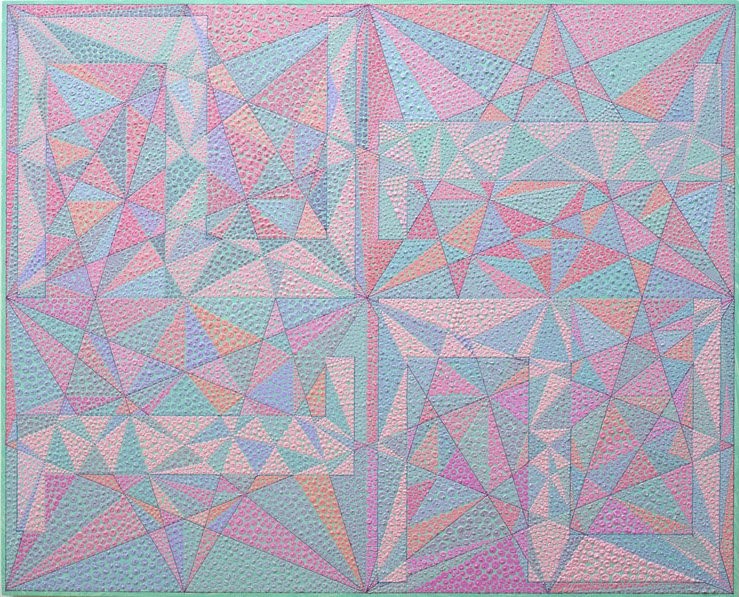 CANADA is pleased to announce “trice” a solo exhibition by Xylor Jane, her fourth at the gallery.

Xylor Jane’s paintings have evolved in several important ways in this new body of work, producing surfaces full of geometric shapes filled with solid and modulated color. These geometries simultaneously fracture and hold the surfaces of Jane's paintings together, camouflaging and revealing imagery in equal measure. New questions arise through the act of painting. For example: is it possible to convincingly paint a point? A thing in the realm of the theoretical but, in Jane’s hands, something simultaneously and necessarily made real as a painted fact.

One motif is numbers: numbers chosen for their particular significance to Ms. Jane. The number of seconds in a day is given prominence in two paintings both titled Leap second that feature the numbers 86,401 and 86,399 respectively. Painted in buoyant colors, the numbers stand in an uninterrupted row in Jane’s unmistakable hand-painted linear style. "Leap seconds" refer to seconds subtracted or added to keep Greenwich Mean Time and Coordinated Universal Time synchronized. The next scheduled leap second is 23:59:60 June 30, 2015. Ultimately, the need is military or corporate, not biological or earthly. The puckishness and defiance in Jane’s focus on the mechanics of time is at the heart of the poetry of her practice.

The act of breaking down something so basic as the temporal dimension of a day into a hard number makes our own mortality come into sharp focus. It is through the labor of making something particular that we can see the profundity of the most ordinary thing. The viscosity and body of the paint, the interaction of the mixed colors and the unexpected rhythms of the drawing assert a connection between the abstractness of the themes and the felt relationship that goes into each painting.

The connection we all have to measurement is lauded and refined in Xylor Jane’s art. The effort to calm, delineate and problematize grids is central to what Jane’s paintings offer. Painting is rooted in a meditation on time, an expression of each painter’s personal experience with time. Jane’s paintings are at once thrilling like a roller coaster ride, but are built methodically with the care of someone truly experiencing slowness. And the notion of trice, a word from Old English, which means to tug on a rope or to move quickly, can be sensed in the gravity of the paintings’ luminous magnetism.
www.canadanewyork.com