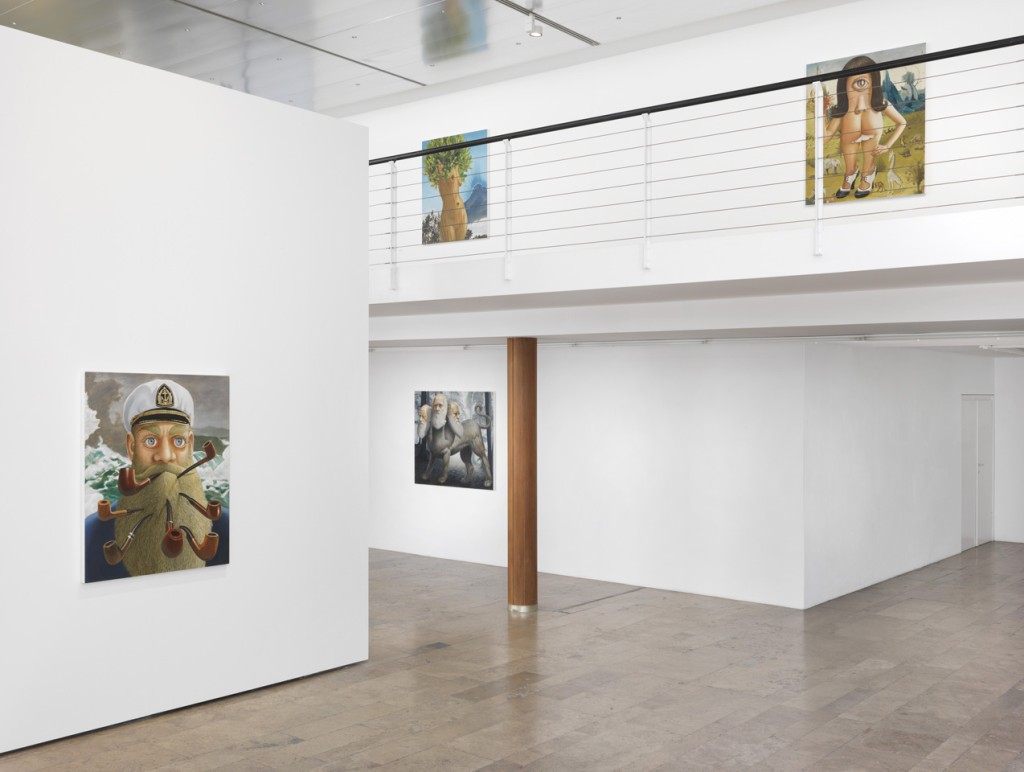 Capitain Petzel is pleased to announce “Small Brass Raffle Drum”, a new exhibition of paintings by Sean Landers. This will be the gallery’s first solo exhibition with the New York based artist and his sixth solo presentation in Berlin, dating back to 1994.

This new body of work continues to define and clarify themes Landers has pursued over his three decades long career. Landers mines his oeuvre via a ready-made small brass raffle drum containing hundreds of hand-painted wooden tickets, on each is written a particular element from Landers’ past work. Seven randomly chosen tickets form the starting point of each painting. In theory, the raffle drum presents a potentially infinite source of material for new paintings. But ultimately, these paintings are anything but random; enter the “Big Brass Raffle Drum”—Landers’ extemporaneousness, the engine of his practice for the past 30 years.

By accessing his personal image bank and his subconscious, and combining them together, Landers creates new extraordinary and unexpected characters that appear both new and familiar. Inherent in these works are elements from our collective past such as ancient mythology, art historical references and the backdrop of time and space, combined with other qualities that are uniquely Landers. These works are direct descendants of the Surrealism proposed by André Breton, Salvatore Dalí, and René Magritte’s “La Période Vache” (1947/48).

Long-standing central themes in Landers’ oeuvre are embodied in the paintings, each depicting a lone character. “Captain Homer (Seven Pipes for Seven Seas)” presents an allegory for the journey through life as a circumnavigation of the globe. For decades Landers has used the device of a lone sailor on the seas as a stand-in for himself and his stream-of-conscience—the guiding force of his art-making.

Opposing forces of artistic longevity and potential ephemerality are examined via a solitary skeleton standing on desolate ancestral land (“Death in Ireland”), and a melting snowman in an idyllic Brueghel scene (“Snowman in Brueghel”). Each painting uniquely articulates the experience of life as an artist and what it means to make something that will last beyond the lifetime of its maker.

Binding these Small Brass Raffle Drum paintings together is “Elysium”, a painting of a dense snowy aspen tree forest illuminated under the night sky. Arborglyphs—words and images inscribed onto the tree trunks—reference each painting and, by default, weave in threads of Landers’ past work. Formally, these paintings are the descendants of Landers’ early “black on white” text paintings from 1993. Just as each aspen tree forest spreads from one ancient unified underground root system derived from a single seedling, so too does an artists’ oeuvre represent a unified and intertwined system of ideas and images. Essential to the longevity of the work is the deep- grounded connection between all works in an artist’s oeuvre, bridging the past with the present throughout a lifetime of making art. As Elysium is the mythological place where favored heroes are conveyed by the gods after death, so too will future generations favor paintings sent from artists in the past.