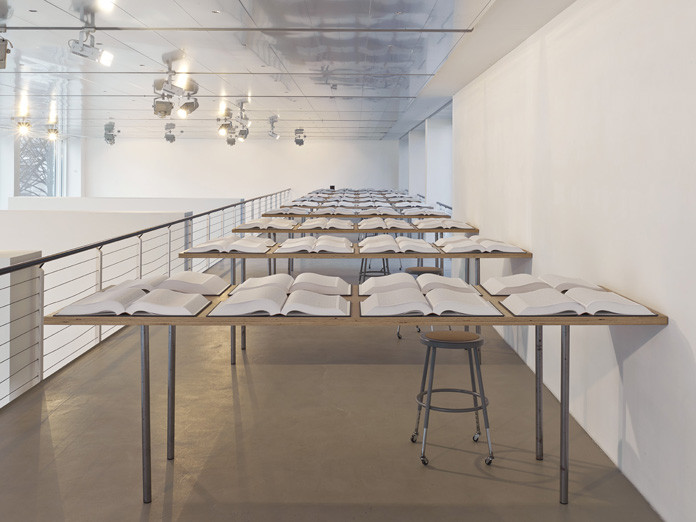 '. . . I must ask you to join me in the disorder of crates that have been wrenched open, the air saturated with the dust of wood, the floor covered with torn paper . . .'
- Walter Benjamin, Unpacking My Library

That exhibition took its name from Jorge Luis Borges' text The Library of Babel, bringing together works whose premises are predicated on the book as a conceptual, psychological, and cultural form. While several artists from the New York exhibition, amongst others Erica Baum and Robert Longo, present new works, pieces are added from mostly Berlin-based artists such as Natalie Czech, Oliver Laric and Eli Cortiñas.

The range of the works reflects the breadth of the subject. Some take as their starting point the form of the printed book - its potential and limitations in a digital age, its status as an artefact or signifier of knowledge. Others deal more explicitly with the library itself as a place where private and public forms of knowledge overlap.

Clegg & Guttmann‘s Sha‘at‘nez oder die verschobene Bibliothek, re-contextualized - A Social Sculpture (2004/2005), a tower of bookcases encircled by a ladder, was originally created for an exhibition at the Sigmund Freud Museum in Vienna. Freud‘s Viennese Library was fragmented and dispersed when he fled the city from the Nazi regime in 1938, and the installation reunited for the first time books from his collection on the psychoanatlytical concept of displacement, later photographed and replaced with photographic prints. Freud's work was also the inspiration for Robert Longo's print Untitled (Freud Bookcase) (2012) and Olaf Nicolai's project Trauer und Melancholie (2009/2012).

Rachel Khedoori’s The Iraq Book Project (2008-2010) is an ongoing documentation consisting of the systematic collection of online news-articles. The artist searches for the terms 'Iraq', 'Iraqi' or 'Baghdad'. The survey begins on the 18th of March, 2003, the first day of the Iraq War, and can be endlessly continued.

Cuban-born artist Diango Hernandez‘s sculpture The Only Book (2008) takes the form of a bookcase constructed with iron bars, of the type used to reinforce concrete structures. Suspended between them is a single book: a first edition copy of Che Guevara‘s 1960 La guerra de Guerillas (The Art of Guerrilla Warfare).

Anouk Kruithof‘s Enclosed Content Chatting Away In The Colour Invisibilty (2009) is an installation of approximately 3500 books which the artist collected in Berlin over a duration of eight months, mostly early 20th Century Eastern-European publications published in the GDR, the coloured edges of whose pages form a loose colour spectrum that varies with every installation of the work.

In the basement, the film-collage Bibliotheken im Film (Libraries in Film) (19‘43‘‘) from the Architecture Museum of the TU Munich is shown, a fast-paced series of library-scenes from 60 Films. (Compilation: Hilde Strobl, Editing: Frank Sippach)

While the works exhibited share a theme, their approaches to it are diverse. But taken together they show a consistent interest in the codification of language, be it verbal or visual, perhaps best summed up by the demand of John Baldessari's contribution - 'LEARN TO READ'.