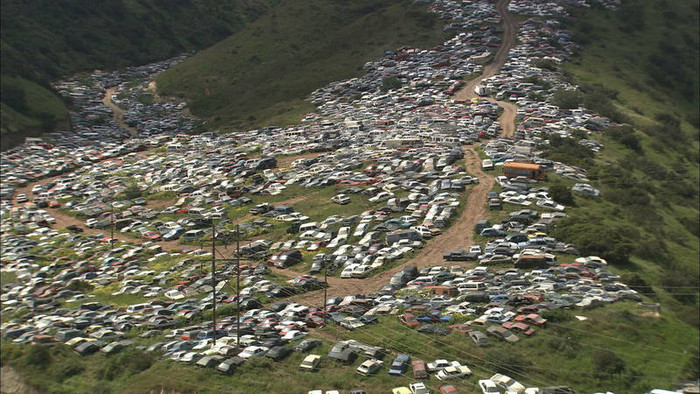 carlier | gebauer is delighted to be able to show two works by Dutch artist Aernout Mik for the first time in Berlin, namely Osmosis and Excess (2005) and touch, rise and fall (2008) in his 5th solo exhibition at carlier | gebauer. With his logical, consistently detailed video installations, Aernout Mik has assumed an important and autonomous position in the arena of contemporary art over the last few years.

Aernout Mik’s video installations very much go their own way both in their content and their formal considerations. They look like trial runs, reconstructing events on the periphery of our social reality in lavishly depicted situations, often with many extras. Situations of political domination, such as a prison camp in a gym or refugees being picked up at a motorway service station, are enacted anew, with a stratum of apparently quotidian situations, everyday confrontations with the forces of law and order, such as pupils and monitors in a school playground, or travellers at the security check in an airport, superimposed upon them. Mik’s mise-en-scène constantly shows scenarios shaped by hierarchy. However the apparently clear-cut balance of power is always disrupted in his videos. The perspectives multiply; suddenly the refugees are carrying wooden rifles, whilst the police officers are sitting on the floor and the security staff are running checks on each other. The gestures of power persist, but their subjects no longer slot neatly into their roles. Mik’s scenarios do not supply a clear narrative; instead his work extrapolates the extremes of order to such an extent that the camera ends up floating through the absurdity of a crumbling reality characterised by repetitions, recasting, mimetic courses of action with an almost ritual air, and irrational excesses. And yet Mik’s constructions do not move away from reality but record it through its extremes.

Osmosis and Excess, 2005 came into being in the borderlands between San Diego in California and Tijuana in Mexico. In the work two contrasting sequences are slotted into each other: footage of the hilly outskirts of Tijuana, dotted with countless wrecked cars, and video images of a downtown pharmacy flooded with mud. Tijuana is the Mexican pendant to San Diego in the USA; the city lies directly on the border between the two countries, with the bulk of border traffic flowing through it. Endless ageing used cars are brought across the border from the USA, only to be stripped of their useful components and abandoned. In the opposite direction, vast quantities of low-cost pharmaceuticals are smuggled from Mexico into the USA through San Diego. Osmosis and excess prevail, a repeated commodity cycle that is now virtually impossible to grasp in its entirety. The landscape along the border and the lives of the people who live there are determined by these phenomena. Osmosis and Excess makes structural correspondences visible, as well as revealing the hierarchical order shaping these. The scrap cars glitter like jewels in the sun in the hills outside Tijuana, whilst downtown medicines, arranged in eccentric series, are sold round-the-clock to US Americans looking for help in clean, brightly-light pharmacies. Mik’s Osmosis and Excess portrays the border region in an extreme panorama format as a microcosm comprising a landscape defined by circulating commodities.

touch, rise and fall, 2008 is Aernout Mik’s most recent work. The double projection takes as its starting point the security checks at an airport. Shots of shopping in the transit area clash with footage of luggage, clothing and bags being searched with excessive care. Images of clusters of exhausted and irritated passengers at the security checkpoint alternate with scenes of bored security staff on a break. Hands reach out to grab products, carry transparent plastic bags and rummage through hand luggage. Products are packed up, others are torn apart, some fall to the floor, drop to bits, are examined and then put back together again. The scenes are set in a sphere tinged with loss, devastation and consumerism, moving between ignorance, care and obsessive control. As was already the case in Osmosis and Excess, this work depicts a commodity cycle through the prism of a borderland. Whilst the goods became the dominant ornament in the landscape in the 2005 work, in touch, rise and fall they begin to impinge directly upon their owners. In the border zone objects and bodies succumb to the ongoing processes of the rise and fall in value of commodities during transit, and both equally become bodies in motion in these circumstances.

Aernout Mik was born in 1962 in Groningen in the Netherlands and now lives and works in Amsterdam. His film installations have been a regular feature in international solo and group exhibitions for over 15 years, and are also represented in numerous public collections. His key exhibitions over the last few years have included solo shows at the Stedelijk Museum, Amsterdam, 2002, in the Ludwig Museum, Cologne, 2004, the New Museum of Contemporary Art, New York, 2005, Kunstverein Hannover, 2007 and Hamburger Bahnhof in Berlin, 2007. In 2007 he also represented the Netherlands at the Biennale in Venice. The Museum of Modern Art in New York will be showing an extensive solo show of his work in 2009.
www.carliergebauer.com