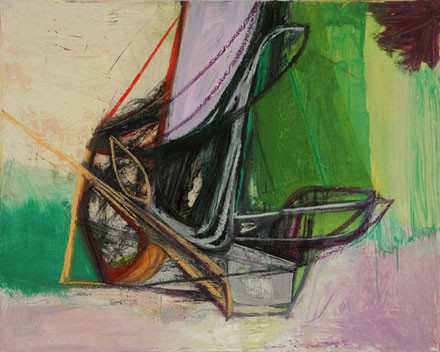 We are pleased to announce Amy Sillman's first solo exhibition at the carlier | gebauer gallery. In parallel, we are showing an exhibition with videos by Harry Dodge and Stanya Kahn, Jos de Gruyter and Harald Thys in Bogen 52.

Painter Amy Sillman was born in Chicago, she lives and works in New York. Her work has been shown at numerous international exhibitions, including the Whitney Biennial and at P.S.1. Sillman's work has developed continuously since the late seventies, and independently of hip trends and fashions. What is remarkable in Sillman's painting is the productive openness toward contemporary culture, humor, mass media and psychoanalysis on the one hand and a stringent and deep interest in the possibilities of expression of abstract visual language on the other. The tremendous freedom in choosing these "sources" is reflected in her artistic practice: She combines figurative elements with abstract ones, everyday objects and abstract forms – creating spaces for association which lead the observer on a path of surprises. Ties to Philip Guston are by no means coincidental – Sillman herself calls him an important figure for her work.

For Amy Sillman, painting does not serve as a means to reproduce the world or to run through the differences between photography and film and the classic medium in which she works. She does not stop at the surfaces but delves beneath the obvious and works on the moments where terror and lust, fear and comedy merge. As an American art critic wrote, to grapple with Amy Sillman's images means to encounter one's own wishes, fears and desires. She herself writes about her work: "My primary artistic concern is to render interior life visual. I am interested in knowing how thinking and feeling look. I am interested in portraying the dialectic between interior and exterior, to mix up the idea of feeling and thinking and remembering and knowing, really being there or not at all."

New works, which increasingly display sculptural characteristics, will be shown in her exhibition "People, Place or Thing." Perceivable in their material presence, they do retain the kind of volatility and uncertainty which only painting exhibits -- "In other words these paintings are like sculptures, or things, but it is not clear that they would really stand up or exist in real life. Many steps have been taken between the original observation and the final structure and finally they have come to rest in a place of psychological presence but uncertainty."

We would also like to call to your attention the current issue of Artforum which features an article on Amy Sillman's work.
www.carliergebauer.com