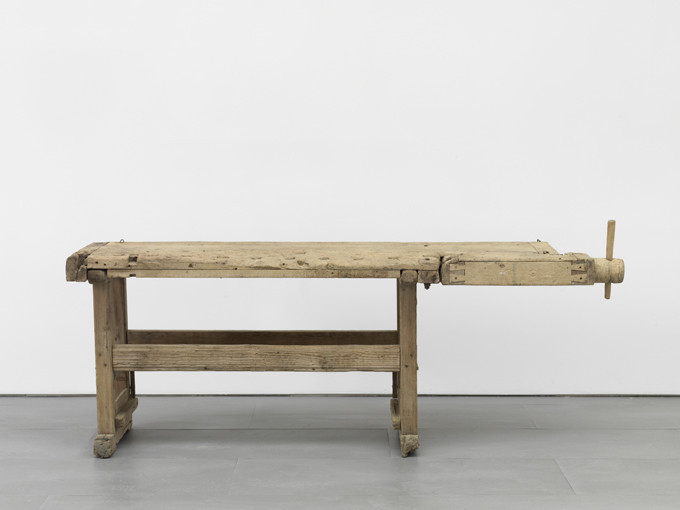 René Block, Björn Dahlem, Maria Eichhorn, Heiner Franzen, Asta Gröting, Adrian Lohmüller, Michaela Melián, Michael Sailstorfer, Hans Schabus, Klaus Staeck, Nasan Tur, Johannes Vogl, Anna Witt
In Familienwerkbänke (family work benches), Asta Gröting’s first solo exhibition at carlier | gebauer, the artist stages the working tables of fourteen artists’ parents. These fourteen work benches open up the idea of the family as well as that of the work between its past and its present as spaces of diverse engagements. Gröting demonstrates these objects as artefacts of a pre-history, which specifies itself in being staged in this gallery space. In looking back, Familienwerkbänke makes visible a new present – an understanding of the work beyond the realm of art.

In her manifold artistic practices, which she has developed since the mid of the 1980s, Gröting translates sculptural thought in diverse media. She creates works, which transfer psychological as well as social relations into forms, the clarity of which makes the complexities they refer to graspable. In Familienwerkbänke, Gröting follows up the sculptural into its counterpart – the werken (crafting).

Familienwerkbänke brings together a group of fourteen pieces of work furniture to model an aesthetic space in which forms of working and schemes of construction are made visible that, usually being identified either as hobby or as wage labour, are rarely perceived as an aesthetic or creative practice. Drawing tables, wood benches, sewing machines, bench vices and kitchen tables here appear as being created as well as creating media themselves. In Gröting’s new work the work benches reappear as examples of a limitless artistic praxis, which finds it starting points in all forms of labour.

Still Gröting does not identify art with craft but expands the perspective onto the parents’ productions, which possibly modelled their childrens’ artistic profiles. Next to the work benches one finds the family name, as well as the key data of the benches’ history, from which, as a form of repercussion, the artistic praxis of the children rose. The craft attributed to each bench here returns as a question of visibility – of the visibility of what those artists, who Gröting asked for their Familienwerkbänke, could see in their partents’ occupations. Many of these benches demonstrated forms of labour which have long been outmoded, mechanical productions, which survived only as hobbies. But still, these benches remain up-to-date, their character altered with the work done on them. What survives in them is that desire to create something, which the artists who Gröting asked saw in their families, and which Gröting foregrounds.

At he same time this formation of fourteen work benches creates a new family, the elective family of the artist. Gröting asked those associated with her, either personally or artistically. In this social search for the pre-histories of ones own affinities, a field of art is reconceived, which opens up between the Ikea table of the versing mother, an assembly-line worker, and the work bench of an aerotechnique physicist who reconstructed models of old ships and demonstrates that it is, in itself a social differentiated field, which transcends generations, classes and genders.

As they become works themselves in Familienwerkbänke, these tables, benches and counters gain an unseen precision. What is delineated on their surfaces is their provenance, their generation, their handling, and their roles in the gendered and social relations of their owners. Gröting’s Familienwerkbänke demonstrates a social as an aesthetic order and sides with an artistic understanding that exceeds the boundaries of the traditional artistic media. Her work Familienwerkbänke combines those aspects of art, which rise from its material labour and those reflecting the sharing of social experiences into a format in which the work benches appear themselves as figures, as aesthetic bodies in formation.