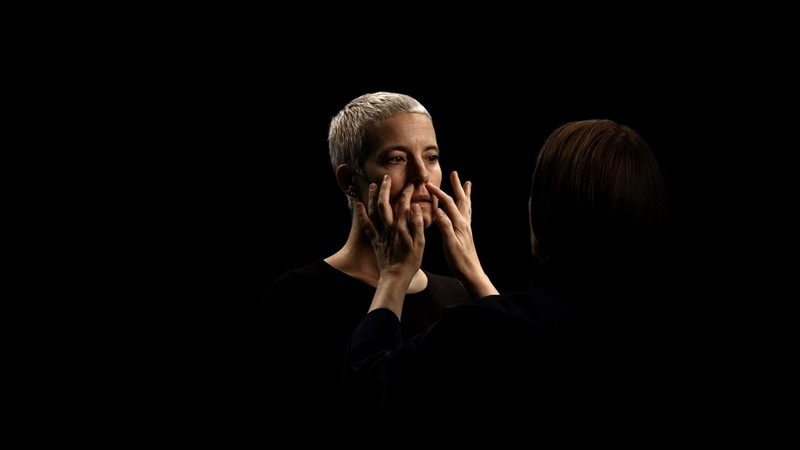 In Gröting’s manifold artistic practices, which she has developed since the mid-1980s, Gröting translates sculptural thought in diverse media. Her works address the social body on both an emotional and a conceptual level, transferring psychological as well as social relations into concise statements about per-sonal, collective, and political entanglements.

The video installation TOUCH comprises the core of the exhibition. To create the work, Gröting invited a number of people that have touched her life in some way — whether colleagues, friends, family members, or public figures — to sit one after the other for a portrait. Shot on a darkened soundstage, a bright spotlight illuminates each figure. They lock eyes with the artist while she traces the contours of their face with her hands. Through the acts of pressing, measuring, and palpating Gröting enacts a form of portraiture that both recalls traditional gestures of sculpting and forms of healing massage. Her fingers traverse the outlines of each person’s face with a distinctly different tempo and range of movement, articulating each individual body as a landscape of difference entwined in radical proximity with the artist.

The eponymous video Buddy Big Mountain tells the story of a gifted Native American ventriloquist who appears both in TOUCH and “The Inner Voice” (1993-2004), a series of videos depicting dialogues between ventriloquists and a puppet built by the artist. For Gröting, Big Mountain expressed the “inner voice” of the United States. The touching video portrait delves more deeply and directly into the country’s conflictual relationship with Native Americans. As Big Mountain shares his familial history and his creative and professional development as a ventriloquist, his testimony also reveals a nexus of intra-tribal tension and discrimination.

Gröting’s sculpture Ghost (2015) is a continuation of the series “Space Between a Family”. Begun in 2010, this series comprises life-size casts of the artist‘s immediate family members over the course of several years. The ensemble of figures morph and change with the passing time, some growing larger while others disappear altogether. Deborah Levy, the British novelist, playwright, and poet who also appears in TOUCH, notes that while this series of sculptures is “a celebration and conservation of life, it is also an unsentimental gaze at family relations - the empty but haunted space of all that is unspoken between them.” In conceptually and emotionally asking questions of the social body by taking something away from it, Gröting “allows this absence to do the talking.”