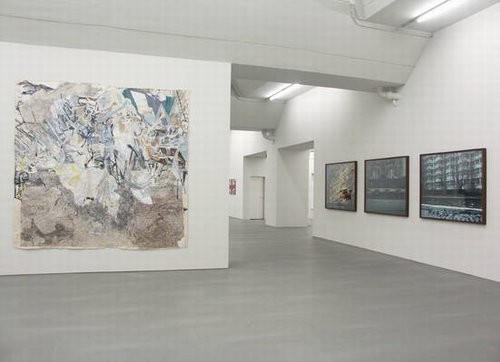 At the start of this year we will be taking part in Paris-Berlin, the second Franco-German gallery exchange. From 15th January 2010 Galerie Michel Rein and Galerie Natalie Seroussi will be showing works by Jordi Colomer, Maja Bajevic, Mark Raidpere, Raphaël Zarka, Allan Sekula and Mathieu Briand in our exhibition space.

Complementing this, carlier | gebauer will be showing works by Aernout Mik, Jean-Luc Moulène and Paul Graham. All three exhibitions will run until 6th March at Markgrafenstr. 67.
As part of the Berlin-Paris exchange, carlier | gebauer will be displaying video works, photographs and sculptures, linked by the common thread of a focus on the spheres of social function into which art extends; as a constantly renewed reconstruction of reality, which calls this reality into question and modifies it.

Raphaël Zarka’s sculptures, for example, are akin to architecture hollowed-out from within. They draw close to the realm of the architectonic and open up new possibilities that contrast with architecture’s functional role by transposing it into an autonomous spatial form.

Architecture bridges the gap between artistic and functional design in Jordi Colomer’s oeuvre too. "No Future", one of his photographic works, takes the dissociation of architecture as a springboard to a new mode of perception.
Photography is also the central medium for Allan Sekula. His group of works "Prayer for the American (1)", contrasts photographs portraying the 'other' side of America, complete with its metropolises and ghettos, with shots depicting America’s fantastic, bucolic landscapes. The photographs become more than purely documentation, with their reflections assuming a narrative, almost filmic twist.

Parallel to this, we are showing an excerpt from another ambitiously sweeping portrait of the USA in the 21st century, namely a series of photographs from Paul Graham’s cycle "a shimmer of possibility". The title cites Russian writer Anton Chekhov, whose sparse linguistic style Paul Graham echoes in his photography. In all but a few works, Graham homes in on a moment, and, rather than depicting it as rounded-off and concluded, taps into its meaning as part of a continuum in the real everyday lives of ordinary people.

The group of works "IO" by Mark Raidpere uses self-analysis as a means to address the individual’s vulnerability in society. The self-portraits portray the artist naked in poses which reveal traces of his auto-aggressive actions. These pieces bear witness to his quest for identity in Estonian society. By exhibiting his nudity, the artist tragi-comically protects his own difference and exclusion from the "official" public sphere.

In Maja Bajevic’s video "How do you want to be governed?", the artist subjects herself to blows in the face from a man, his back turned to the viewer, who intones the sentence that forms the title of the piece. She thereby creates a space that triggers associations between domestic violence and politics, a space that appears uninhabitable and in that very characteristic seems radically real.

Mathieu Briand’s seven-part series of white, mechanically produced rods, supplemented by other semi-figurative elements, constructs a complex nexus of allusions and hints that share an iconography rooted in fairy tales and legends.

Jean-Luc Moulène’s "Berlinbilder", photographs from post-1989 Berlin, portray views of squares, public transport, faces and urban still lives. The motifs, just like the city itself, are devoid of any system. They depict moments of its subjective reality, 'images from the interstices', chronicled in all their theatricality and quotidian banality.

Aernout Mik’s bizarre scenarios do not provide a clear narrative; instead order is replaced by chaos over and over again and power is replaced by a vacuum. The camera floats seemingly effortlessly through the absurdity of a disintegrating reality. In his work "Scapegoats", groups of soldiers, prisoners and armed civilians, stage-managed by the artist, engage in a perpetual struggle for power, with the roles of oppressor and oppressed constantly switching back and forth.
www.carliergebauer.com