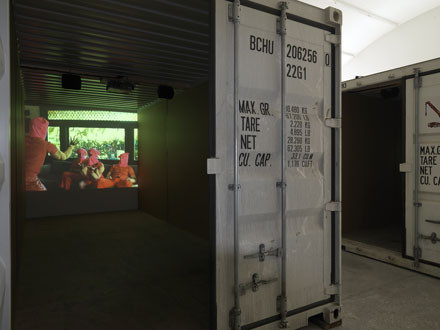 We are pleased to announce the video exhibition No Ins and Outs with the duos Harry Dodge and Stanya Kahn, Jos de Gruyter and Harald Thys.

The approaches of Harry Dodge and Stanya Kahn (born 1966 and 1968 in California, they live in Los Angeles) and Jos de Gruyter and Harald Thys (born 1965 and 1966 in Belgium) could not be more dissimilar. However, the videos shown in No Ins and Outs do have something in common: an interest in the medium of language, how it is used and how it works. Language as a means of communication and of locating (oneself) in the world appears here not as a given, but rather as a "work in progress." The wacky and humorous presentation of the characters permits a seemingly safe distance to moments of the "foreign" which appears in each of the works.

Artists Harriet "Harry" Dodge and Stanya Kahn, who live in Los Angeles, have been collaborating since 2001, and their work has been shown both at international art exhibitions at renowned film festivals such as Sundance. The video Can't swallow it, can't spit it out (2006) presented at carlier | gebauer shows what happens when a camera and a woman dressed up as a valkyrie face each other. The valkyrie speaks directly with the camera, which plays the role of an observing and accompanying person. In a quasi-documentary way, it captures moments that move back and forth between great wit, despair and complete seriousness. The duo's newest video, Master of None (2006) seeks to estrange the characters and the plots even more strongly than the previous videos. Here, the characters are a nameless and masked group that is shown in a residential building doing everyday things – however, someone is cooking with aluminum foil in the frying pan and the focus lies on the recurrent movements which produce repetition without an outcome in a performative way. Here, the camera observes from a distance moments of abstract actions devoid of meaning, which evoke both laughter and unease because of their proximity to the all-too-familiar.

The duo's works will also be presented at another venue in Germany: in the group show "Between Two Deaths" at ZKM in Karlsruhe beginning in May 2007.

In the videos by Jos de Gruyter and Harald Thys, the background of performance art becomes apparent, just as in the works of Harry Dodge and Stanya Kahn. The sceneries of their photo and film works are dusky, at times uncanny, and some are situated in fantastic surroundings. Since the mid-1980s, their common work has found international recognition; a solo exhibition at MUHKA in Antwerp is planned for this year. The videos presented at carlier | gebauer, The Bucket (2001) and The Spinning Wheel (2002), show situations located in familiar circumstances and taken to their absurd extremes. Distance is created by means of totally reduced acting, or by slowing it down or accelerating it in the extreme, and subsequent synchronization, distance which is intensified by the static camera observing the scene completely from the outside. The figures exist in situations of being constrained and excluded, shut off from the outside world. It is only intruders wearing trashy masks who set this rigid situation in motion: suddenly, and as if from another world, they break into the hermetically sealed rooms and disrupt the deadlocked routines.

Each of these videos takes a perspective of the world which is afraid neither of pathos nor of the observers' laughter. What is shown is never completely strange, even though it is stylized, but rather shows images of the "world within us," thereby reawakening unpleasant familiar feelings, bringing the repressed up to the surface and permitting us to laugh about just that.
www.carliergebauer.com