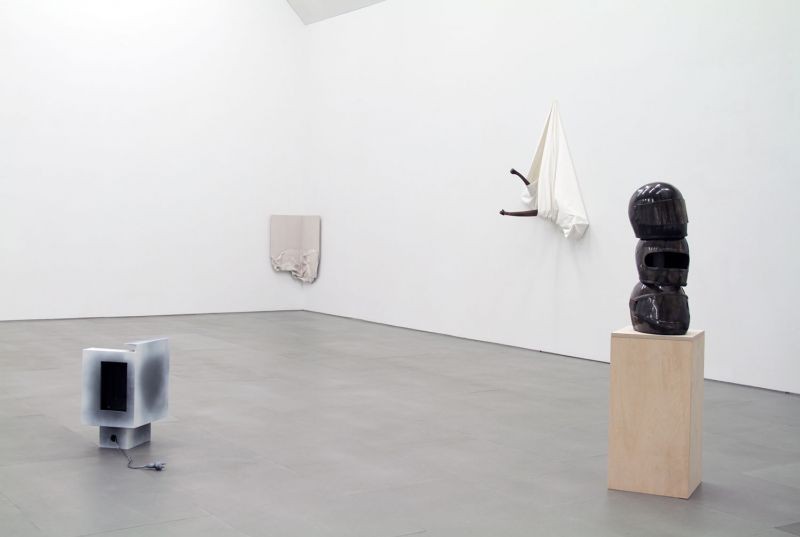 curated by Emily Wardill in conversation with Jesi Khadivi

carlier | gebauer is pleased to present three projects: the German premiere of Emily Wardill‘s film, When You Fall Into a Trance; the group show I hear your voice reflected in a glass and it sounds like it is inside of me; and new work by Finnish artist Marianna Uutinen, opening 30 January 2015 from 6–9pm.

"Second Reversal: Sight touches and touch sees. Break the cycle even for a moment you fall. Sight walks or life ceases. He who doesn't know how to walk puts one foot in front of the other; he who does puts an eye in front of each shoe." – Michel Serres, (Variations on the Body)

When You Fall Into a Trance tells the story of Dominique – a neuroscientist who both researches and manifests the belief that memories are stored in flesh. Her primary patient, Simon, is afflicted with a neural disorder that affects his understanding of the position of his limbs and the effort required to move them. He can no longer control ordered movement and is unable to activate his own body without looking at it. If you turn off the light in a room, he falls over. Simon‘s perceptual boundaries have shifted. Even simple acts like pouring a glass of water have become unachievable. Dominique helps Simon relearn how to move by retraining his mind. He must first imagine his gestures so that he can actualize them. When You Fall Into a Trance depicts Dominique‘s kaleidoscopic workaholism, estranged relationship with her daughter, and recourse to Internet dating as her work and personal life begin to meld. The film embodies the dislocation between intent and form, a romance of machines, and the mechanization of emotions.

In parallel, the gallery will present the group show titled, I hear your voice reflected in a glass and it sounds like it is inside of me, curated by Emily Wardill in conversation with Jesi Khadivi. The exhibition was conceived in relation to Wardill’s research for her film, which is based on the real-life story of Ian Waterman and his enigmatic proprioceptive disorder. Like the reflections of mercury puddles pooling upon a subwoofer, rippling to the vibrations of heavy breathing, each artwork has been selected to expand or further complicate the distressed and fluid elements at play in the film. Cartesian logic severs intellect from the body, privileging thought over sensation and argues that the self is essentially non-corporeal. Ian Waterman’s case posits an Escher-like paradox. Although he cannot move his body without looking at it, he can gesture through the aid of his imagination. Could this mean that we articulate self-awareness, neither as a Cartesian thinker, nor as a proprioceptive feeler, but potentially as an actor embodying inherited mythologies?

Amongst other works, the group exhibition includes two black and white photographs by André Kertész from the Distortions series (1933) that depict female figures reflected in distorted mirrors. Kertész‘s Distortions were a significant historical influence for Wardill‘s film, much of which was shot in enormous undulating mirrors. These photographs will be shown alongside a series of biomorphic sculptures titled Sacks (2009) by the artist Markus Schinwald – a self-proclaimed “builder of prostheses for undefined cases” and Richard Hughes’ sculpture Lids (2014) made up of decapitated helmets piled atop one another, evoking human presence as an absent symbol. In the video by Peter Coffin, Untitled (Shepard Risset Glissando Shirt) (2010), a headless man’s breath gently ebbs and flows accompanied by a tonal illusion that tricks the brain into thinking it’s hearing a never-ending scale. Özlem Altin’s diptych Whispering Hands (2013) layers time-lapsed gestures of concentration and remorse, while Ann Lislegaard draws upon the hermaphroditic Gethenians depicted in Ursula K. Le Guin’s canonical novel Left Hand of Darkness as inspiration for her haunting work Remains of an Animation (2014). Disappointed machines and the longing of thought to become material run through the show, from Harry Sanderson’s Human Resolution (2012) to Lea Porsager's bronze "thought form" sculptures How to Program and Use T-F (2013), which were created with the help of a clairvoyant.

In the adjacent exhibition room, corresponding themes of distortion, sensuality, action and erasure play out in new abstract painting by gallery artist Marianna Uutinen. Using her signature technique, Uutinen fuses together thick layers of acrylic paint, building up a skin-like structure which is then draped across the surface of a traditional canvas. Each overlaying gesture negates, blends and reveals the accumulation of her actions. The act of painting and the paint itself become entangled in their own reflexivity. The results are both ecstatic and hauntingly visceral.
www.carliergebauer.com