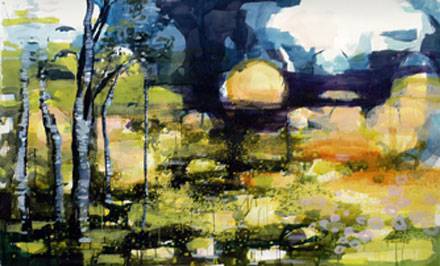 
On 3th June 2005 carlier | gebauer will be opening two new solo exhibitions. In Arch 51 three new works and a large selection of editions by the American Fred Tomaselli will be presented, whilst in Arch 52 the second solo exhibition by Janaina Tschäpe with a photo series and large- format multi-part drawings will be on display.

Works by the German-Brazilian Janaina Tschäpe, born in Munich in 1973 and now living in New York, will be on display in Arch 52. In contrast to Fred Tomaselli her works are something almost physically gestated, characterised by their undulating latency and organic plenitude. At the very core of Tschäpe’s drawings, photos and video works lies the search for possibilities of female representation, or, in the spirit of Tomaselli’s art, these works are evidence of a search for female transcendence. In Tschäpe’s art femininity, which is always derived from the masculine and imprisoned in stereotypical depictions, is to be freed from images through images. While it is true that Tschäpe gives latency a clear form, this is however subject to permanent imaginative and morphological transformations. It is always journeying towards becoming something else: an eerie incubus. carlier | gebauer will be showing a photo series, which Tschäpe developed while she had a grant in 2004 in Weimar, along with large-format multi- part drawings.