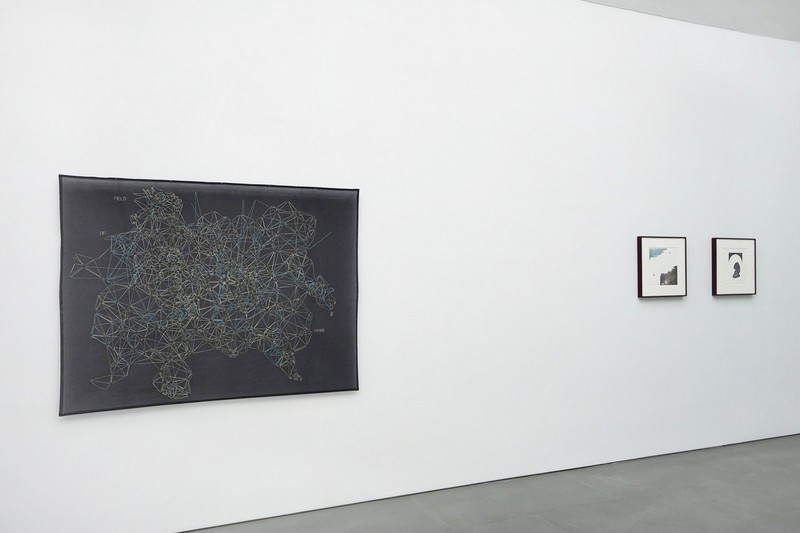 Jessica Rankin is best known for her expansive celestial maps and landscapes, which are interspersed with codes, signs, and symbols that refer to the processes of memory, intuition, and interpretation. Rankin often begins her creative process with the written word, combining stream of consciousness, found texts, stories, memories and fleeting thoughts. She then cuts apart individual words and phrases and recomposes them into new sequences using a method of ”guided chance.“ These clusters of texts are then integrated into Rankin‘s drawings and embroideries.

In her current exhibition with carlier | gebauer, Rankin continues to employ constellation maps as a frame of reference. The works on view all refer to a single night sky - a date of personal significance for the artist. By focusing on a discreet, private moment, Rankin places the personal within a broader macro-relationship to time and space. Rankin‘s large-scale embroidery Field of Mars depicts a delicate celestial lattice plotting the points between the stars on the date that she found and visited her mother‘s grave. Although the term Field of Mars extends back to antiquity, Rankin‘s use of the name refers to the cemetery where her mother was buried. Typically ascribed to the women‘s realm, the medium of embroidery proposes an immersive slowness of process that reinscribes an association that once belonged to military antiquity into a highly subjective poetic reference.

Similarly, landscapes become personal and not simply geographical in Rankin‘s works. Her collage Could I Just Have The Sober Hand depicts the rolling hills, meadows, and rugged coastline of England. Using photographs culled from the book A Writer‘s Britain, Rankin‘s collage seems to emphasize the seams between each image, highlighting a discontinuity in the depicted landscape that formally evokes lapses in memory and the gap between things as they are experienced and as they are remembered.