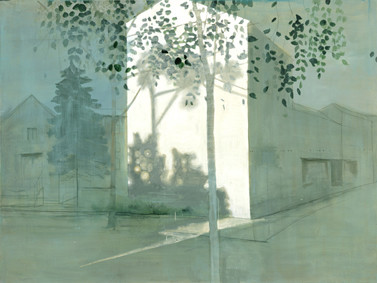 We are delighted to announce the second solo exhibition by Kailiang Yang at carlier | gebauer.Kailiang Yang’s landscapes, “composed around the tension between elements that are only hinted at and precisely reproduced details”, trace out a line connecting Chinese and European traditions in landscape painting. The artist, who has lived in Hamburg for six years, draws his motifs from experiences of the city and its countless views. His paintings are however neither simple portrayals nor abstractions of what is seen, but instead transport atmospheres into the material, depict moments experienced, movements and the way these are immobilised by observation.

The simple beauty of his paintings, the scant, carefully deployed brushstrokes, with a technical skill and precision pointing to Yang’s training in classical painting in China, draw moods up to the surface rather than depicting tangible loci. There are nonetheless references to the place or time where the works came into being, through titles such as Sommer (Summer), Planten un Blomen (Hamburg’s botanical gardens) or Gefionstraße. Yang works in the studio, taking his memories and impressions as his point of departure rather than photographs; for he strives to capture an atmosphere, not to create a precise depiction of the city, the natural world or people. That explains why his titles are repeated although each of the works assumes an utterly different form: for example, Stadtpark 9 (2007) is actually the ninth work inspired by the Stadtpark gardens in Hamburg, yet the colour, shading and format deployed here differ from the preceding works, just as the aesthetic impression left by the setting was different on each occasion.

A second strand in Kailiang Yang’s oeuvre also becomes clear in Stadtpark 9: rather than a precisely formulated game involving colours and shadings, sharp definition and blurring, the work is a reduced constellation made up of precisely drawn lines and clear painted surfaces that remain shallow, reflecting the medium of painting as such. The painting’s stylistic means move into the limelight here, for example the undercoat becomes part of the composition, capturing the process of painting on the canvas. Yang’s painting calls for something akin to a filmic way of looking, which registers the most minute changes and tracks the flow of the surfaces within the paintings. None of his works can be seized with just one glance; instead each develops its full impact when considered over a longer period, with the different strata coming to the fore, the various hues altering with the angle of our gaze, and line and surface repeatedly forming new configurations.

Kailiang Yang, born in 1974 in Jinan/Shandong (VR China), studied painting from 1992 to 1994 at Shandong Art School. In 2001 Yang arrived at the Hamburg Hochschule für bildende Künste (Hamburg College of Fine Arts) to begin a post-graduate course. His teachers there were Olav Christopher Jenssen, Anna Guðjónsdóttir and Norbert Schwontkowski. He completed his studies in 2005 with Werner Büttner.