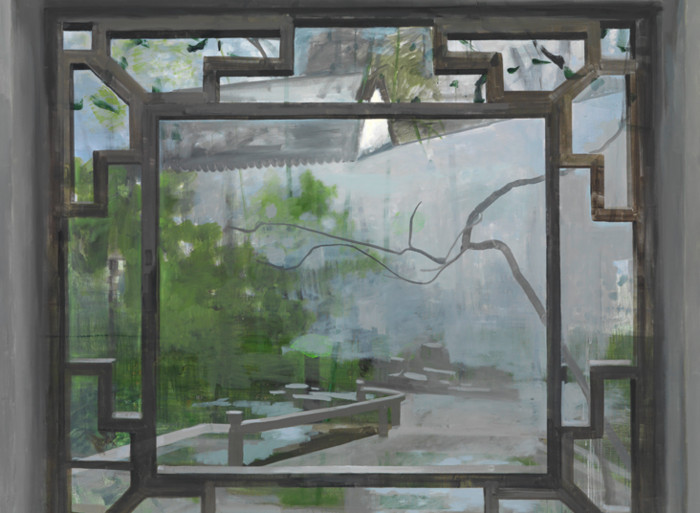 We are delighted to present the third solo exhibition by Hamburg-based Chinese artist Kailiang Yang. In his new show the young artist introduces a broad take on landscape painting as a genre - a new perspective that sets the current works apart from his older pieces. He meshes the traditions of Chinese garden architecture with those of European trompe l’oeil in the works exhibited, taking this as the foundation to redefine the relationship between his images and viewers.

Art historian Norman Bryson describes the difference between the two longest painting traditions, China’s and Europe’s, as a difference in the intellectual roots. Whereas European painting developed perspectives that lead the viewer into the painting, whilst assigning the viewer a perspectival position outside the picture frame, Chinese painting spread out open perspectives before audiences, in which colour and line moved freely in relation to each other. Here the brushwork – in contrast to European painting - allows us to catch a glimpse of the genesis of the work, with the process of painting per se remaining visible. In adopting this approach, the tradition of Chinese painting did not in any way concentrate on subjective originality, but focussed instead on perfecting the epochal style, the imprimatur of a genre. Conversely European painting increasingly foregrounded the imprimatur of the artist as subject, a direct encounter between the painter and the viewer.

These apparently contradictory aspects appear as a sequence of dovetailing elements in Kailiang Yang’s painting. In his free landscapes, where scarcely any figurative touches remain, colour and line take on separate identities, jointly forming painted surfaces, their tenor emerging as a kind of journey into the landscape itself, displaying characteristics intrinsic to the style of painting rather than to the scene portrayed. Northern Germany’s misty landscapes unfurl across oversized canvases, unconstrained by outlines, figures or clear perspectives. In his new series, this panoramic gaze shifts into a close-up perspective. Here viewers find themselves looking at trompe l’oeils, at the stony frames within the canvas’ wooden framing, at intricate lattices in walls which allow oblique glimpses into Chinese gardens. There is a long tradition of painting these walled enclosures, a tradition as ancient as the gardens themselves, which take the world of nature and transform it into a harmonious composition. In Kailiang Yang’s painting, the stony order of the surrounding walls, dictating a controlled gaze through strictly ordered openings within them, regulates access to these gardens. These are complex spatial constructions, which mysteriously envelope the viewer. Whilst the painting as such is still visible, and the perspectival construction comprehensible, the perspective, the centre of the gaze remains concealed. The viewer is not drawn into the image but surrounded by it, by gardens that cannot be entered or viewed clearly.
In the European tradition, trompe l’oeil is about a direct link between the image and the viewer. This connection is disrupted in Kailiang’s gardens. Viewers are left as an assumed, non-empirical gaze in the face of a landscape that embraces them on the painterly plane, yet excludes them in perspectival terms. Here Kailiang Yang is combining two Chinese art forms – gardening and landscape painting – whose harmony functions only when viewers are exiled from the image. Whereas European audiences are verily sucked into Poussin’s Arcadian visions or Vermeer’s interiors, Kailiang Yang creates a highly cryptic variant of Bonvicini’s “Not For You”, by clearly demarcated the boundary between painting and viewers, the frontier of the gaze and desire that runs along the stony window opening onto the garden.

Kailiang Yang, born in 1974 in Jinan/Shandong (PR China), studied painting from 1992 to 1994 at Shandong Art School. In 2001 Yang arrived at the Hamburg Hochschule für bildende Künste (Hamburg College of Fine Arts) to begin a post-graduate course. His teachers there were Olav Christopher Jenssen, Anna Guðjónsdóttir and Norbert Schwontkowski. He completed his studies in 2005 with Werner Büttner