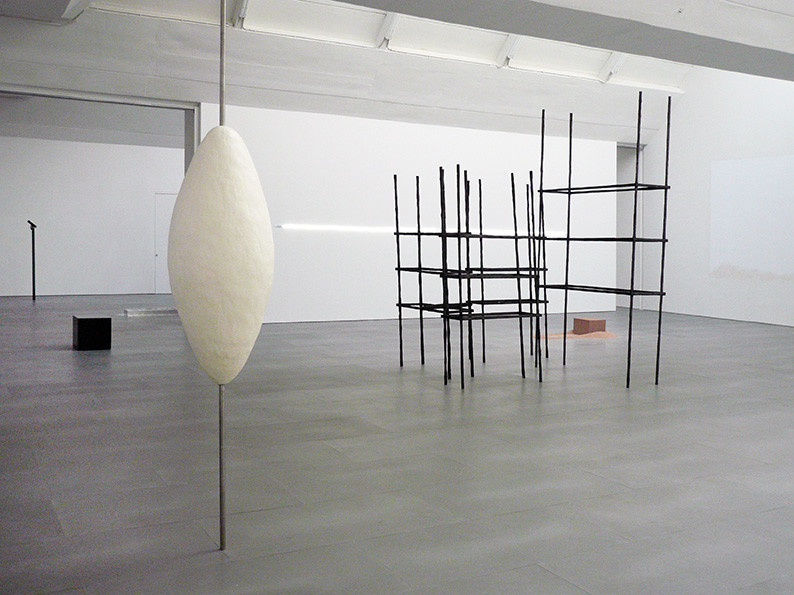 The exhibition title Pieces of Evidence is not only that of Michel François solo show at carlier | gebauer, but likewise aptly describes his artistic outlook and method. At first sight he seems to concentrate on sculptures, but these involve not only the objects proper but also the ‘objects’ intrinsic convictions’.
Starting from photographs that he took in the basement of the Palace of Justice in Brussels, François concerns himself with each object as a ‘piece of evidence’, a case in point. The corrupt objects that he found there in the evidence room, such as a truncheon or a baseball bat, were under wraps, numbered, labeled and in part identified. Their relationship to the court building, which initially they characterize as evidence of a deed, also involves the possibility of considering them in a neutral context independent of the Palace of Justice – as trivial, harmless items. From the perspective of art, the sculpture bears fundamental witness to its historical material: in François’ work it can be read as the trace of what happens inside and outside the studio. They need to be seen as a response or echo to his photographs in the basement under the court, which in François’ work are transferred from one semantic field into the other. The transfer takes place first in the studio and does not entail a collection of objects but an experience of the authority they exude – for example a truncheon that serves as evidence of a crime.
In the exhibition space, as in the literature of writers such as Francis Ponges, the Pieces of Evidence take on a life of their own. They become experimental terrain that function like a laboratory. In the exhibition proper, François offers viewers an insight into his working approach, albeit in a curated form. The exhibition space becomes a field of action. This is reflected in a cube of sand that leaves traces in the space, or in a block of ice (positioned besides a block of asphalt) that melts before the viewer’s eyes and can thus be experienced not just as a trace, but as a live phenomenon.
Michel François’ troves consist of materials that he transforms and are in a process of permanent recycling. In this sense, no work is ever completely concluded. Sculptures like Big Shelf, Bed made of Rag or Plaster Cube all involve a concern with time, not to mention delayed, inactive action. The presence of outsized objects and the game played with their materials also not only explore ‘who creates sculpture’ but also ‘what sculpture creates’. In Pieces of Evidence, François’ works stage the exhibition space as a field of experimentation and function as sculptural gestures that offer takes on chaos and order, dispersion and reconstruction. In an epilog on Michel François’ order of things, Guillaume Désanges described this as follows:

“In a seemingly marked-out, hierarchical world which is far more chaotic and uncontrolled than it appears, Michel François’s essentially sculptural work, which on the contrary is obviously chaotic and subtly framed, is a model of sensual and ideological reconfiguration of the immediate. His delight in forms and games of representation derives from his wonderment at the world’s materials, nature, situations or ideas. Despite the sometimes sombre rawness of some references, the artist ultimately sets out to reconcile what are sometimes distant and contradictory fields in the world of art. Highly formal sculpture underpinned by a set of complex theoretical and ideological strata, laying claim to a liberal art, while accepting the slavish share of work. The ideological issues of modernity (the everyday as material, art as a cosa mentale, universality of forms, abstraction, seriality), without ignoring the great issues of classical art (perspective, nature, manual work, metaphor, illusion, trompe-l’oeil). A focus on the world and on the intimate sphere, neutralised by elegant detachment from forms. Representative clarity and simplicity, contrasted with indeterminate perception. In short, acceptance of physical and moral responsibility for the fundamental demands of sculpture, without sacrificing freedom, risk and uncertainty.”*

Michel François lives and works in Brussels. His works are currently on display in the Des Gestes de la Pensée exhibition curated by Guillaume Désanges at La Verrière Hermès in Brussels. In 2012, his art was last on show in Crac de Sète, in Sète, France. Among countless international exhibitions, he was responsible for such projects as the Belgian Pavilion at the 48th Venice Biennale (1999) and took part in Documenta 9 in Kassel (1992).