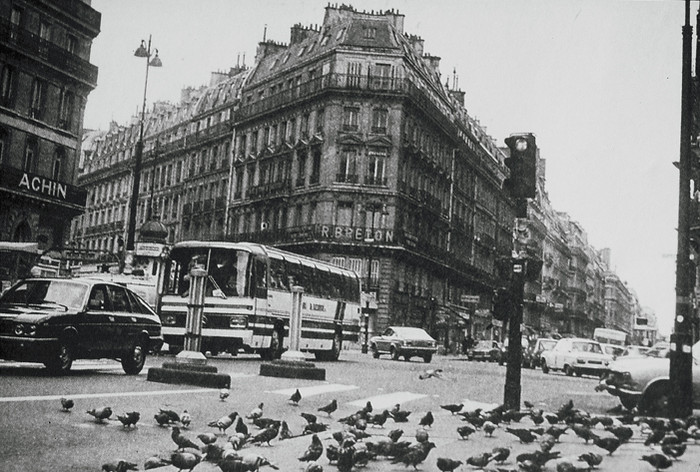 „Out of the two hours you spend in a movie theatre, you spend one of them in the dark. It's this nocturnal portion that stays with us, that fixes our memory of a film.“

The first time I watched La Jetée (1963) —the quintessential film by Chris Marker, made of solemnly still images — was during a class on experimental film by the British filmmaker Guy Sherwin, while I was an exchange student in the San Francisco Art Institute. It was shown from a beautiful 16mm copy in the original French version with English subtitles. It had a special resonance to me since it takes place in Paris, the city where I was born, but which I left at a very early age. I felt that my own memories of that city, which still remain very strong recollections, fit the idea of a certain type of nostalgia endorsed by the main character of the film — I believe that Marker is dealing in many ways with his trauma of the occupation in WWII (he was part of the resistance, where, some say, he earned his nom de guerre from compulsively keeping notes). From then on, La Jetée became my favorite film of all times, and as I have watched it over and over again I learned to prefer the English version, which I have heard Marker also favors himself. That class was not only crucial to my practice for introducing me to that film, but also because, somewhat paradoxically, I understood there was another way of reading films as we watched the whole history of avant-garde filmmaking (Michael Snow, Bruce Conner, Stan Brakhage, etc) - including Sherwin's own astonishing black and white films that lay somewhere very closely between the realms of photography and cinema. Like most avant-gard filmmakers, he liked to express a certain disdain of narrativity — something I never shared, in fact I'm very drawn to narratives — the only exception being La Jetée. It may have something to do with Sherwin’s self-proclaimed incapability of following a story when watching a film: he said his mind would drift every time a certain image or a moment in the story line stroke a chord in his thoughts, triggering a chain of associations, to the point where often he would find himself in a part of the plot that seemed totally incomprehensible to him as if he had just started watching it.

In Rio, as a child, whenever I would go with my parents to the cinema, it was not uncommon that we would arrive so late that half of the film had already being played. I grew accustomed to have to infer what had preceded in the plot. Back in the 80's, cinemas in Brazil usually screened the same film through the course of a day and evening, and you were allowed to stay and watch it as many times as you would like. That consented me and my parents to never feel too pressed in being on time since we could just wait until the reel was rewound and watch the part of the film that we had missed. It was with great expectation that I watched the end credits roll by, as the other spectators left, then the trailers while the new public took their seats, and finally, confirm my suspicions about the beginning of the story, despite that it seldom lived up to the versions I had rendered in my mind.

In the 90's, when it became fashionable to have films with a plot structure where act 3 would come in the beginning and act 1 in the end, the so called "3, 2, 1" structure, the most well known example being Tarantino's films, it was probably derived from the cable TV culture where while zapping through dozens of channels you could land many times in a random part of a film, most of the times of mediocre quality, that became invigorated by the mystery concerning the nature of its story; like when you overhear a conversation between strangers in a subway which inevitably is interrupted when either of you have to leave the train and you're left with a cliffhanger (to be continued...). The storytelling here is more about conjecturing what the story is, rather than being taken by the hand towards a rollercoaster of dramatic pathos.

Sigmund Freud in his first book, The Interpretation of Dreams, mentions that our recollection of a dream is nothing but a constructed memory of a far more fragmented and irrational unconscious impulse. In fact, Freud says that as we remember the dream we adjust events in a more coherent order and perhaps fill in the remaining gaps of an illogical dream sequence with ready-made thoughts from previous dreams or fantasies (e.g., day-dreams). He names this reflex of consciousness ‘Second Revision’; he claims it to be the same agent of our subconscious that makes optical illusion during our waking time possible, or sonorous illusion, for that matter (like hearing our name being shouted by a complete stranger, only to realize that the word uttered was actually very different).

I like to see the making of my stories, in essence, as investigations about stories where the product is like a forensics analysis: areas get fenced out to be examined, and evidence is removed from where conclusions can be drawn, but it leaves the connecting of the dots entirely to the viewer – who becomes the de facto investigator.

Georges Perec brilliantly makes a parallel between the storyteller and the jigsaw maker in the introduction of his novel "La Vie mode d'emploi" (Life: User's Manual)", which, for its narrative structure, uses the room-by-room description of a residential building in Paris: "We ended up deducing what is without a doubt the ultimate truth of the puzzle: despite appearances it's not a solitary game: each gesture that the player does, the puzzle maker has done before him; each piece which he fetches or fetches for a second time, which he caresses, each combination which he attempts and attempts again, each trial and error, each intuition, each hope, each discouragement, have been decided, calculated and studied by the puzzle maker.