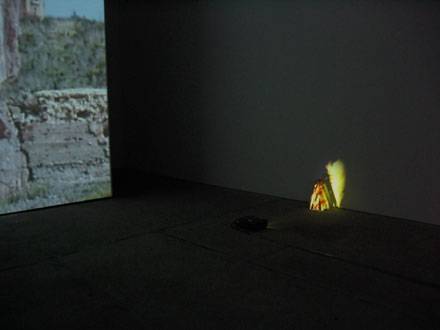 Diaz Morales' works, in the 1990s almost exclusively shown at film festivals and in video programmes, have increasingly been exhibited in the European art context too since his time studying at the Rijksakademie in Amsterdam in 2000-2001. Over the last few years for example his works could be seen at the Stedelijk Museum Bureau Amsterdam (2003), Kunst-Werke in Berlin, Tate Modern, London (2004), Le Plateau in Paris and internationally at LMAK Projects, New York (2005), with his most recent exhibition being located at Attitudes in Geneva.

Diaz Morales experiments with various cinematographic genres, modes of expression and stylistic means; he takes social constellations, literary models, culturally coded images as well as travel impressions and memory fragments as the hook and starting point for his intricately woven, wide-ranging series of images, which are often extremely complex in narrative terms. Like other young “non-European” artists of his generation, his oeuvre resists attempts to be fixed by categorising definitions; it is not merely film, not solely art, documentary on occasion but never simply illustrative. However, the feature that perhaps distinguishes him from other is a pronounced feeling for his protagonist(s), be it in images, voice-overs, or in front of the screen.
In film, to cite Diaz Morales, the idea unfolds between the space and the time of the narrative, in the action and movement of its elements and characters. For his second solo exhibition at carlier | gebauer the artist has developed a series of Prototypes (Arch 52), installations that transcend the narrative framework of his film work to date, differentiate the idea into various spatiotemporal sequences and allow new options to interact for their elements, prototypes and protagonists, with the express intent of re-thinking the whole, of re-formulating the idea.

Prototype of Boxes (Box of Steps, Box of Cosmos), made up of two video screens shown in small silvery cases, establishes a connection that encompasses archaeologists’ discovery of a human footprint – the earliest testimony to human migration on the continent of America, at least as far as we know at present – and extends to incorporate measurements of space through images from the Hubble telescope and 3D reconstructions of the star system. The boxes thus set up an abstract mental image of the limits of time and space as opposed to archived knowledge or a precisely localised source of information.

Prototypes of Gates (Bone Stair, Endless Stair) comprises a slide projection of an endless staircase extending deep into the ground and a ladder made of bones set up in the exhibition room, which hangs from the ceiling and stretches over the floor. The borders between time and space, prehistory and the cosmos are no longer abstract scientific concepts, not purely intellectual ideas, but the lived circumstances, tangible in materiel terms, of human existence, of our terrestrial being: “The limits of Time and Space are reachable.”

Finally, the video projection Yo Estuve Aqui (I was here) once again lays a trail back to the narrative structures of earlier works – and to our fundamental human need to secure, for ourselves, a place in the story: in the midst of the desert a man writes on the walls of a ruin. Yo Estuve Aqui - I was here. With the camera zoom the lettering scratched onto the wall is inscribed onto the heavens and humankind in all its inventions and ideas.